As the economy slowly begins to reopen, people across the country are absorbing whatever data is available—from an increase in national COVID-19 cases and hospitalizations to unemployment rates, stock market fluctuation and the overall health of small business America. 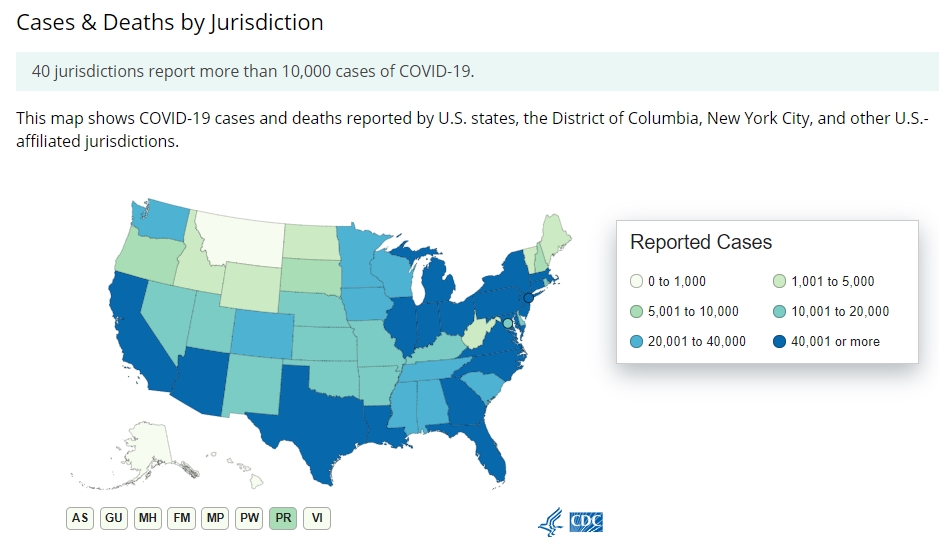 The Small Business Optimism Index increased 3.5 points in May to 94.4, a strong improvement from April’s 90.9 reading. Eight of the 10 Index components improved in May and two declined. The NFIB Uncertainty Index increased seven points to 82. Reports of expected business conditions in the next six months increased 5 points to a net 34%, following a 24-point increase in April. Owners are optimistic about future business conditions and expect the recession to be short-lived. “As states begin to reopen, small businesses continue to navigate the economic landscape rocked by COVID-19 and new government policies,” said NFIB’s Chief Economist Bill Dunkelberg. “It’s still uncertain when consumers will feel comfortable returning to small businesses and begin spending again, but owners are taking the necessary precautions to reopen safely.” Real sales expectations in the next three months increased 18 points to a net negative 24%. Expectations about future sales are beginning to rebound after April’s lowest reading in survey history of a net negative 42%.

Optimistically, total nonfarm payroll employment increased by 2.5 million in May 2020 after a 20.5 million decrease the month prior. Most economists expected an even sharper decline, to the tune of an additional seven million jobs. Understandably, it has everyone wondering—economists alike—how predictions differed so much from actual reporting.

“There are two things going on at the same time,” John Wolfers, an economist at the University of Michigan, told The Atlantic in a recent interview. “There is a suppression, and there is a recession.”

Suppression is the shutdown of businesses by governments and other institutions, such as universities and sports leagues. (Consumers have suppressed their behavior, too; Americans stopped going to restaurants before restaurants were officially closed.) Suppression happens quickly: One day you can go to the nail salon; the next day you can’t. But it can also be undone quickly: One day you can’t swim in the pool; the next day is an Ozark bacchanalia.

Recession is something quite different. It’s local stores going out of business, major retailers filing for bankruptcy, people losing jobs that don’t come back, and major industries—say, aircraft manufacturing—pinched for years. A mayor or governor can’t automatically fix any of that by announcing that everyone can go swim in the pool now. In short, the recession is all the lasting damage that goes beyond the short-term suppression of economic activity. The suppression-depression frame brings the bewildering jobs report into sharper focus. –Derek Thompson, The Atlantic

“In April we lost 20 million jobs, and in May, 2.5 million of those jobs were suddenly recalled,” Wolfers said. “That tells you that at least one-eighth of the economic crisis is the mechanical unwinding of the suppression.”

Indeed, that is reassuring news but, as Betsey Stevenson, a former member of the White House Council of Economic Advisers in the Obama administration reminds, “Extrapolating a ‘rocket-ship’ recovery from one month of job numbers is myopic and [frankly] irresponsible. Fifteen percent temp layoffs recovered and increasing permanent job loss is not even a V.”

Certainly, there is contentious division between those who expect the economy to make a rather quick rebound and those who believe the U.S. is on path to surpass the Great Depression. Readers are encouraged to study the most current Small Business Optimism Index, as well as review the complexities of the economic argument above in full context. Also, follow the links to learn more about unemployment insurance and unemployment insurance relief during the COVID-19 outbreak, including contact information for state unemployment insurance offices. 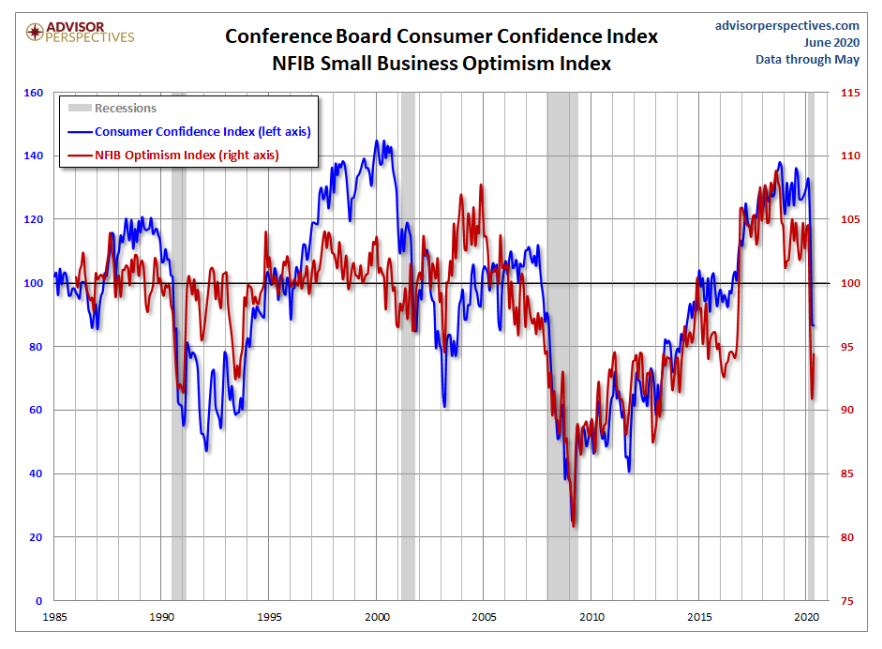 Here are the Business Optimism Index and the Conference Board Consumer Confidence Index side-by-side. The consumer measure is the more volatile of the two, so it is plotted on a separate axis to give a better comparison of the two series from the common baseline of 100. These two measures of mood have been highly correlated since the early days of the Great Recession. The two diverged after their previous interim peaks, but have recently resumed their correlation. A decline in Small Business Sentiment was a long leading indicator for the last two recessions.

The current prognosis of the automotive industry remains hopeful—supporting data is analyzed in the June KPI State of Business – Automotive Industry section. While new vehicles sales slowly climb their way out of the abyss of a pandemic, wholesale auction sales are on the rise and used vehicle sales are proving to be extremely resilient in turbulent times.

“The good news is that auto sales didn’t come to a complete standstill,” said Jessica Caldwell, Edmunds’ executive director of insights. “The fact that retail sales—not fleet—are what kept the market propped up speaks volumes to the resilience of the American consumer. And the way that dealers were quick to pivot to online sales also underscores the incredibly responsive and resourceful nature of the industry in the face of adversity,” she added.

Coronavirus uncertainty amid economic contraction. Auto loan delinquency rates fell in May, but much of the improvement may be a result of loan accommodations, which were reported by Equifax to be 7.3% of auto loans by the end of May. In May, 1.45% of auto loans were severely delinquent, while 5.19% of subprime loans were severely delinquent. Both rates were higher than last May’s rates. The subprime delinquency rate in May was the highest for the month of May going back to 2006. The initial May reading on Consumer Sentiment from the University of Michigan increased to 78.9 from 72.3 in May. The increase in sentiment was driven by improving views of future expectations as well as current conditions. Consumers also saw improving buying conditions for vehicles and homes. The peak in daily new COVID-19 cases in the U.S. was seven weeks ago, but the new case trend has at best flattened out recently as several areas of the country are seeing an uptick in new cases. Some cities and states are contemplating reimposing lockdown orders. Despite these concerns, we continue to see positive recovery trends in the auto market in June. –Manheim