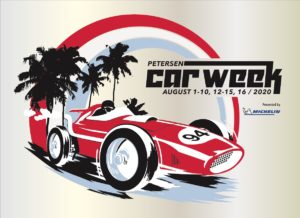 The Petersen Automotive Museum announced today its complete schedule of events and list of judges for Petersen Car Week Presented by Michelin, which will take place from August 12-16, 2020. The week-long event will feature over 25 hours of original content.

Viewers can tune in daily to watch original content from manufacturers, enthusiasts, automotive lifestyle events and auction houses. Videos will be broken apart into hour-long episodes that will premiere on the Petersen’s YouTube channel.

Keeping with the Monterey Car Week tradition, Wednesday will be kicked off by McCall’s Motorworks Revival and include a live auction hosted by Bring a Trailer. Gunther Werks and BMW will be debuting vehicles, while Donut Media, The Torque Show and Top Gear BBC will premiere never-before-seen video content.

Thursday will be marked by one of the most anticipated vehicles of 2020, the T.50 supercar by Gordon Murray Design, which will be discussed by Canepa Motorsports. The day will also be highlighted by the Future Collector Car Show hosted by Classiccars.com, multiple private garage tours and an exclusive discussion around the Corvette C8 with Tadge Juechter.

Friday will be highlighted by three virtual car shows hosted by Legends of the Autobahn, Porsche Owners Club of America and The Quail, A Motorsports Gathering, which will be presenting the Spirit of The Quail award to an entrant vehicle that best represents the iconic Monterey lifestyle event. The day will also feature a walkaround of the new Koenigsegg Gemera, and the 2021 BMW M8. Garage/factory tours will be given by RUF and HRE Wheels.

Saturday will include two virtual shows—Concorso Italiano and Exotics on Broadway—and celebrate motorsports history with Sonoma Speed Festival and WeatherTech Raceway Laguna Seca. Sonoma Speed Festival will debut POV track footage from its 2019 event. WeatherTech Raceway Laguna Seca will premiere “A Lap Through the Ages,” highlighting laps of the famed circuit from different eras of racing.

“As Petersen Car Week Presented by Michelin draws nearer, we would like to thank our partners for helping us capture the essence of Monterey Car Week virtually,” said Petersen Executive Director Terry L. Karges. “Although we’d much rather be gathered together, the week will deliver all of the passion and allure of the August events we know and love.”