The new LC 500 Inspiration Series, the fifth on the LC platform, takes cue from a partnership between air race pilot Yoshihide Muroya and Lexus engineers. The Lexus team worked on ways to create efficiencies for Muroya’s aircraft for everything from the grip design of the control column to maximizing aerodynamics efficiencies using testing data learned on Lexus automobiles.

With some of the same engineers who built the Lexus LFA supercar on board, Lexus took a unique approach to the aerodynamic efficiencies of Muroya’s airplane by turning a preconceived concept on its head. They found that taking an airplane wing and flipping it upside down created vortices that improved maneuverability and efficiency at the wingtips. After the team was able to prove their theory on Muroya’s aircraft through testing and competition success, the Lexus team then aimed to employ that knowledge onto the LC by creating an automotive wing prototype built from aluminum. The team knew the final version, which would span nearly six feet in width, would need to be light, durable and warp-resistant. Carbon-fiber, the same material employed on Muroya’s aircraft, seemed like the appropriate material.

In the end, the engineering team created a carbon-fiber reinforced plastic (CFRP) spoiler. The wing serves as the defining attribute of the new LC Inspiration Series, Lexus said, following the trailing edge arc of the trunk and defined with two downturned winglets on either end. The winglets are fully functional and create a vertical vortex that helps smooth out the turbulence generated from airflow along the car’s flanks. 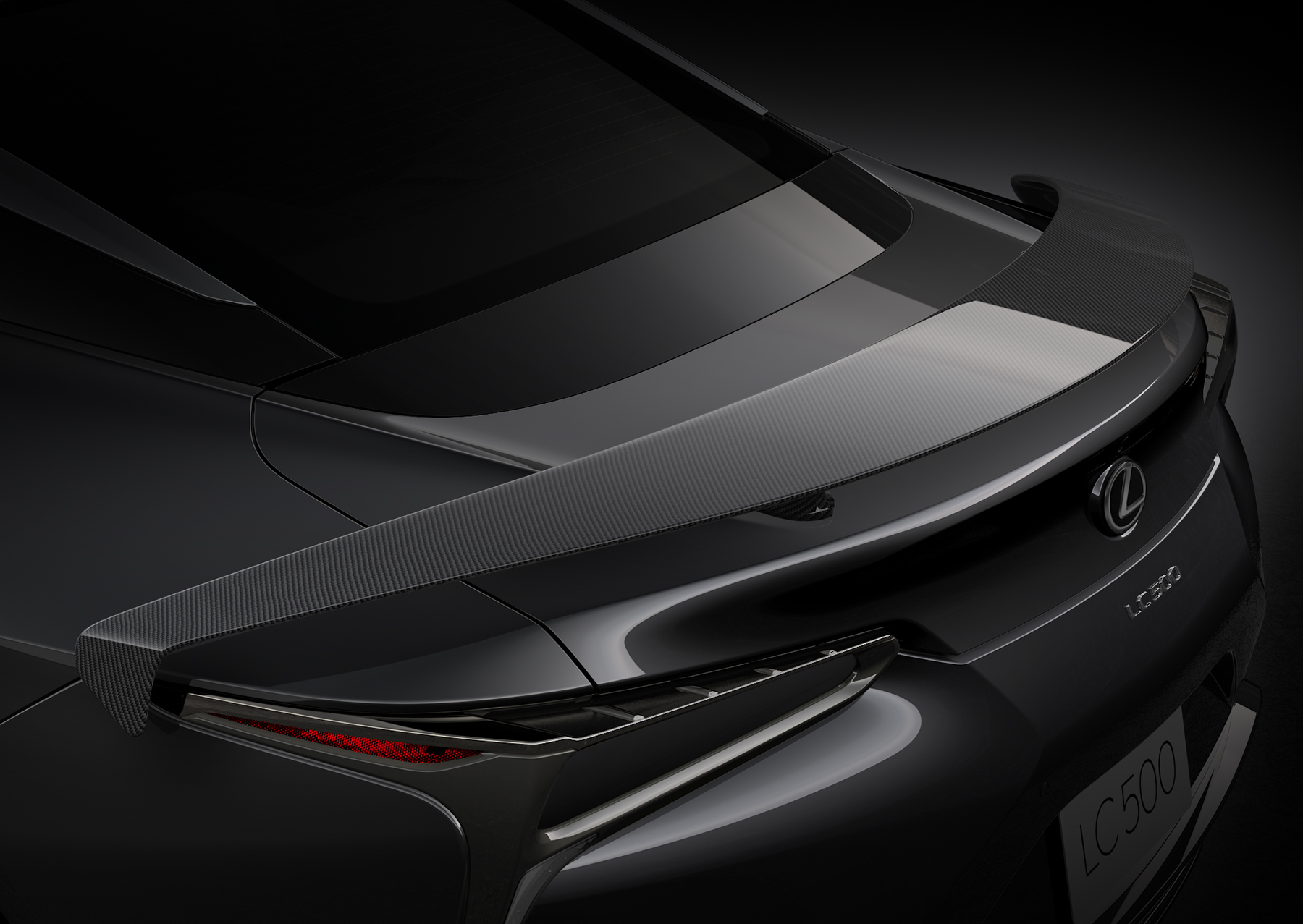 Standing apart from the standard LC 500, the 2021 Inspiration Series is accented with a combination of features not found on any other LC package. The limited-edition vehicle is offered in one exterior color, Obsidian, which is paired with 21-inch black forged-alloy wheels. A carbon-fiber reinforced plastic (CFRP) roof is standard, a complement to the carbon-fiber rear air wing spoiler.

The LC 500 Inspiration Series also gains some additional enhancements in driving performance thanks to the Torsen limited-slip differential. The standard Yamaha rear performance rod with damper, an available option on other LC models, provides added rigidity to the suspension package.

In the interior, the serialized badge on the center console immediately identifies the limited nature of the vehicle and its sequence of the 100 produced. The cabin is adorned with black Alcantara-trimmed sport seats that feature Saddle Tan accents and seat belts. The steering wheel and shift lever are also accented in black Alcantara trim. A carbon-fiber scuff plate accents the door, and a Mark Levinson 13-speaker 915-watt Reference Surround Sound Audio system comes standard. 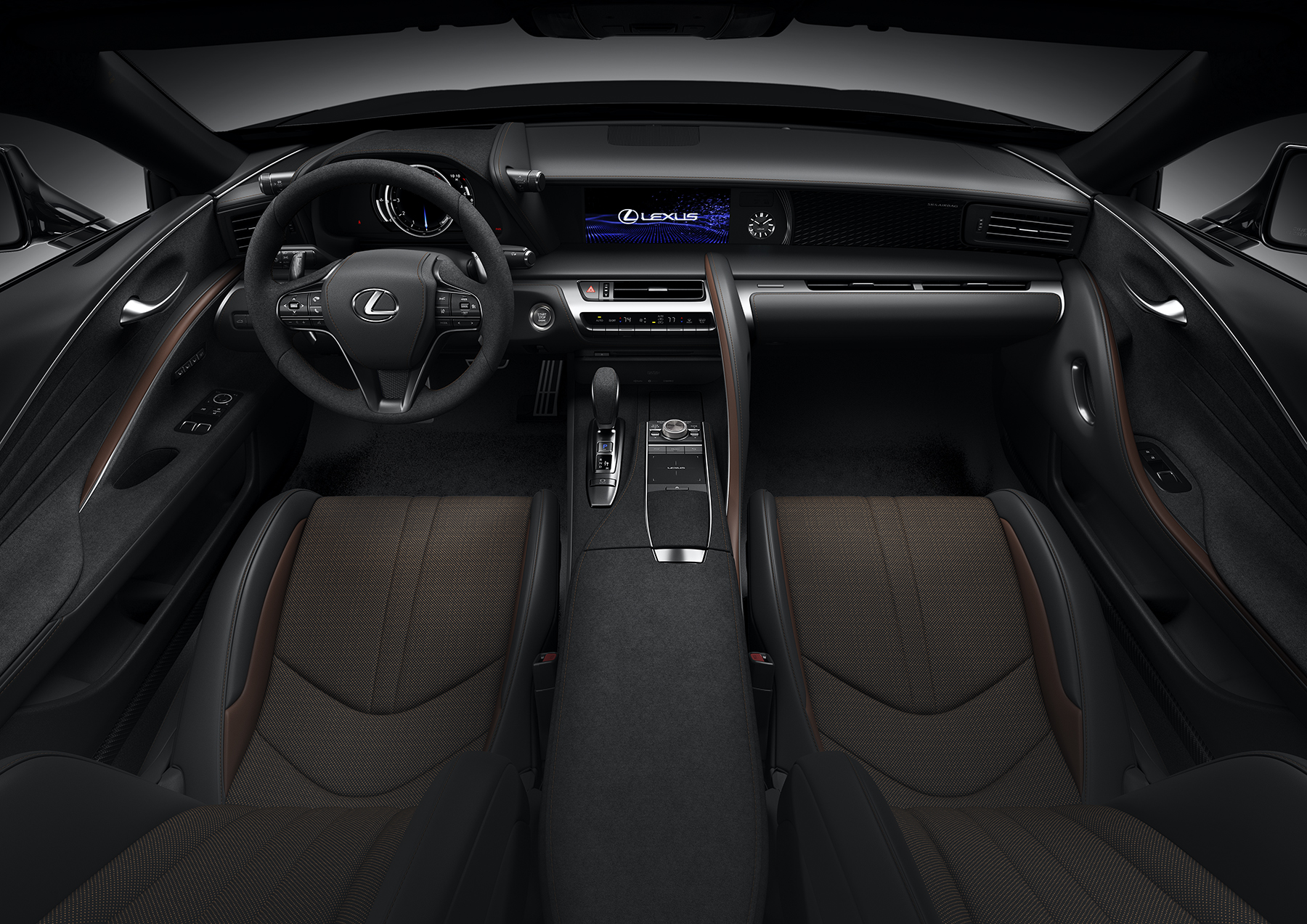 The LC 500 Inspiration Series benefits from the same updates to the standard LC 500 for 2021. Lexus engineers were able to trim 22 pounds of unsprung weight from the vehicle, which is highlighted by the use of aluminum lower suspension arms, lighter suspension stabilizers with a hollow design and revised diameter, new high-strength coil spring material, and lighter 21-inch rear wheels.

Lexus also refined the LC’s suspension with adjustments to the electronic absorber controls of the front suspension to increase the length of the stroke. Engineers then optimized the bound stopper rigidity to help create a smoother overall suspension stroke. Rear stabilizer rigidity was enhanced to aid front turn-in ability to provide more linear steering input.

Other key enhancements for the 2021 model were made to the 10-speed automatic Direct-Shift transmission on the V8-powered LC 500, as the shift logic was updated to help provide improvement for daily driving in what engineers refer to as the “active zone,” or the area where most drivers find themselves at in the 50-70% throttle range. The Direct-Shift transmission allows engine RPM to expand in this range to accentuate the feeling of acceleration before shifting into the next gear.