A second estimate of GDP in the first quarter of 2020 shows a contraction of 5% (annualized) in comparison to 2019. Taking into account the timing of COVID-19 and lockdown order enforced across the country, a much deeper contraction is expected during Q2, with the worst of it concentrated in April, according to The Conference Board.

May and June, fortunately, will show a fairly strong rebound as the economy comes back online and solid progress will continue to be made over the summer. However, monthly economic output in September will still be approximately 6% lower than it was in December 2019, before the pandemic hit. Growth in Q4 will likely slow further as consumer spending struggles to return to the levels seen in 2019.

The Conference Board is adopting a “swoosh” shaped scenario as our base forecast. We expect second quarter GDP to decline by almost 40% (annualized). This large drop is driven by a fall in consumer spending of nearly 50%, a drop in real capital spending of just over 20% and a fall in exports of more than 35%. Following a large rebound of over 30% in Q3, we expect slower growth in Q4 that will bring December 2020 economic output to about 95% of what it was a year earlier.

On the basis of this updated forecast, GDP will contract by 5.7% for 2020 on the whole. However, the more rapidly the economy reopens the greater the risk that we experience a COVID-19 resurgence that would require implementation of containment measures. This would result in a W-shaped scenario that would hurt fourth quarter growth and extend this economic crisis into 2021. 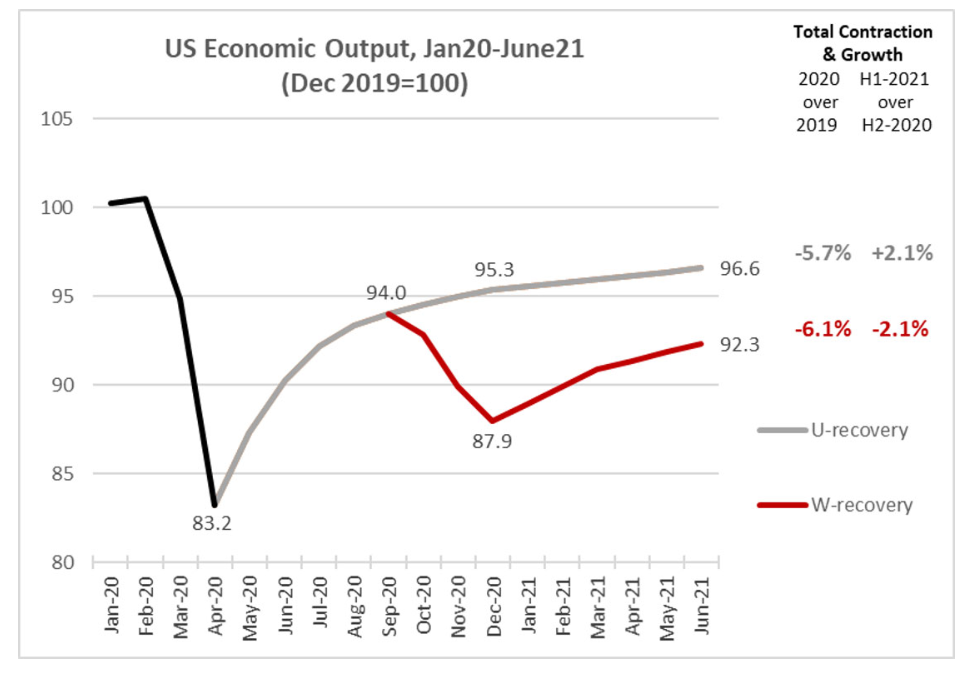 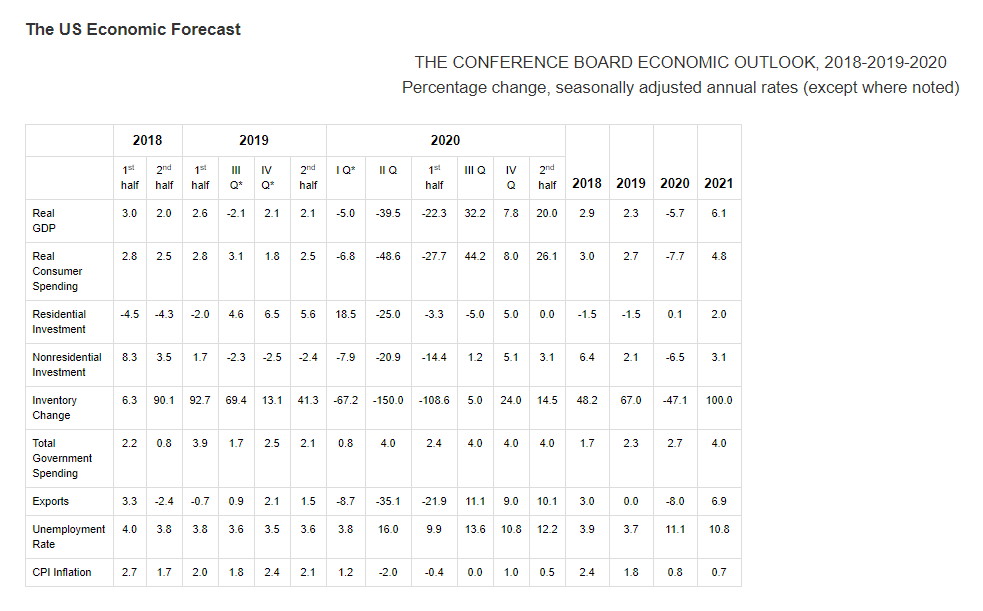 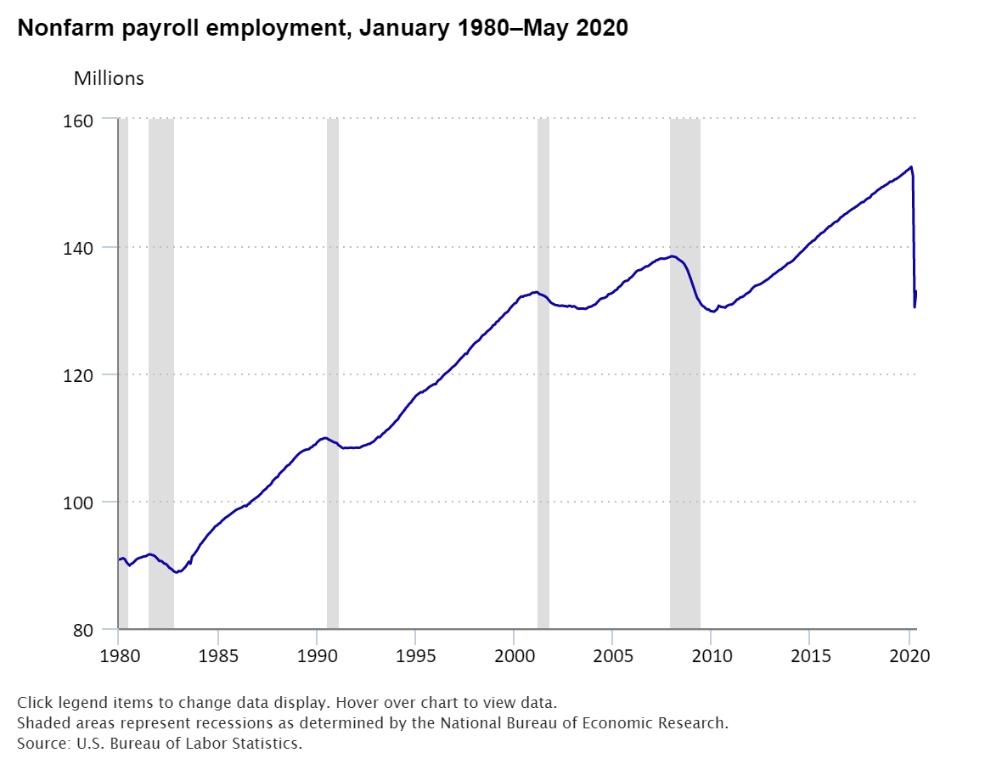 Total nonfarm payroll employment increased by 2.5 million in May 2020, reflecting a limited resumption of economic activity that had been curtailed due to the COVID-19 pandemic and efforts to contain it, announced the U.S. Bureau of Labor Statistics. Employment fell by 1.4 million in March and 20.7 million the month prior. Despite the May increase, nonfarm employment in May was 13% below its February level.

Furthermore, the number of unemployed persons who were categorized as a temporary layoff decreased by 2.7 million in May to 15.3 million, following a sharp increase of 16.2 million in April, according to the Bureau. Among those not on temporary layoff, the number of permanent job losers continued to rise, increasing by 295,000 in May to 2.3 million.

According to the U.S. Bureau of Labor Statistics, employment in leisure and hospitality increased by 1.2 million in May, following losses of 7.5 million in April and 743,000 in March. Employment in food services and drinking places rose by 1.4 million during the reporting period, accounting for about half of the gain in total nonfarm employment. May’s gain in food services and drinking places followed steep declines in April and March (−6.1 million combined). In contrast, employment in the accommodation industry fell in May (−148,000) and has declined by 1.1 million since February. 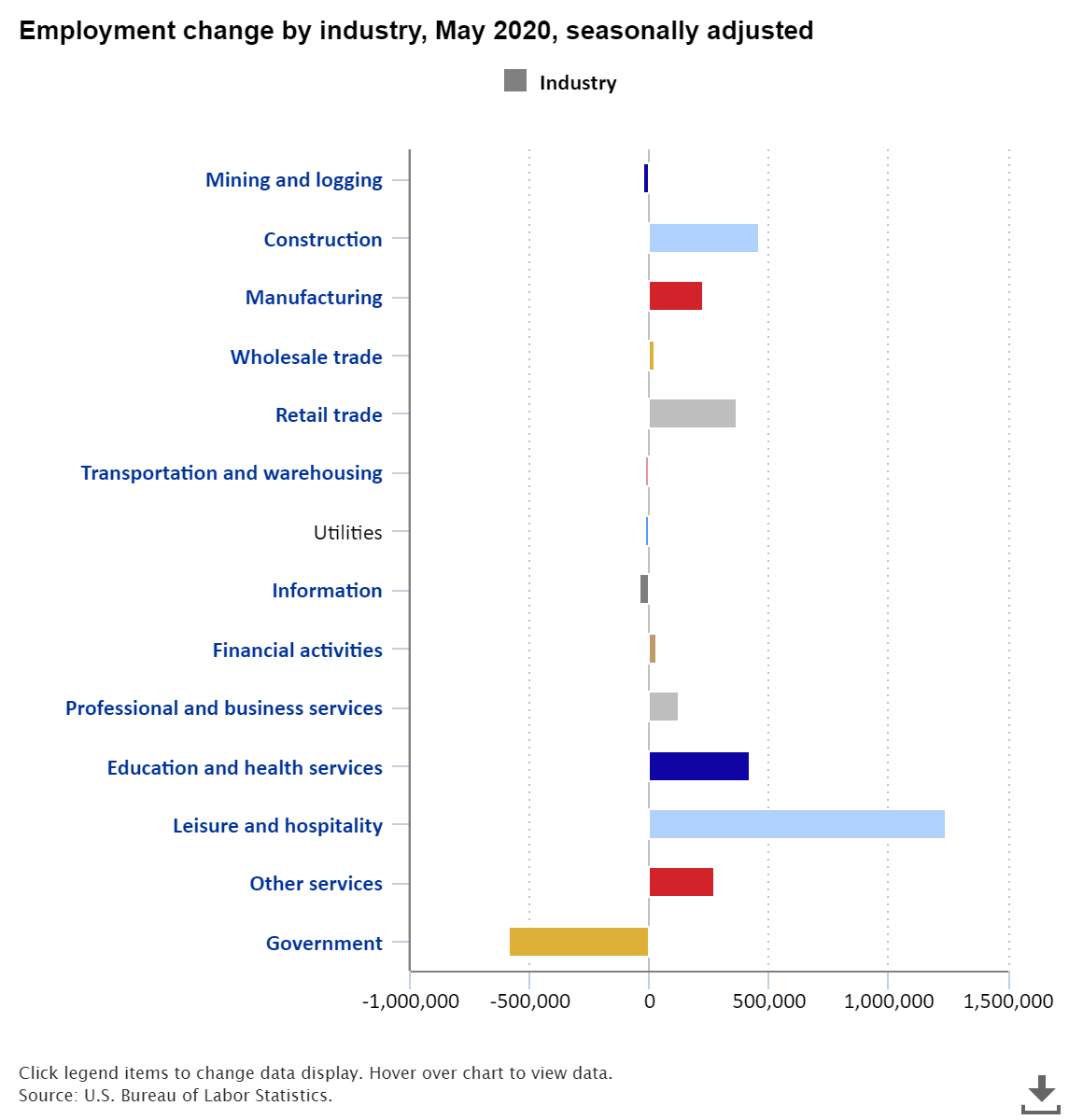 Important takeaways, courtesy of the Bureau:

• Construction employment increased by 464,000, gaining back almost half of April’s decline (−995,000). Much of the gain occurred in specialty trade contractors (+325,000), with growth about equally split between the residential and nonresidential components. Job gains also occurred in construction of buildings (+105,000), largely in residential building.

*All data, analysis and charts are courtesy of the U.S. Bureau of Labor Statistics.