The Consumer Price Index for All Urban Consumers (CPI-U) declined 0.1% in December on a seasonally adjusted basis, after increasing 0.1% in November, according to the U.S. Bureau of Labor Statistics. Over the last 12 months, the all-items index increased 6.5% before seasonal adjustment. 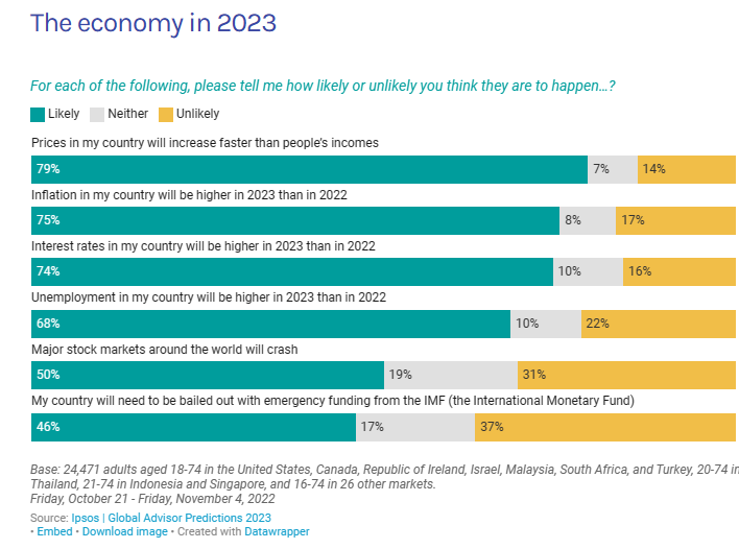 While the labor market currently remains strong, expert opinions about the overall economy range from a pending deep recession to a projected soft landing. JPMorgan Chase CEO Jamie Dimon – head of the largest bank in the U.S. – first sounded the alarm over the state of the economy back in early May 2022. He cited serious concerns over inflationary pressures, a “hawkish” Federal Reserve and the war in Ukraine.

Historically, high inflation leads to interest rate hikes and an economic downturn. “That invariably happens – the classic overheating scenario, which leads to a recession. We’ve seen this story before. When inflation picks up and the Fed responds by pushing up interest rates, the economy ultimately caves under the weight of higher interest rates,” says Mark Zandi, chief economist at Moody’s Analytics.

Zandi is considered “in the minority of economists” who believe the Federal Reserve can avoid a recession by raising rates right up to the delicate point of squashing growth, though he concedes expectations are high the economy will swoon. 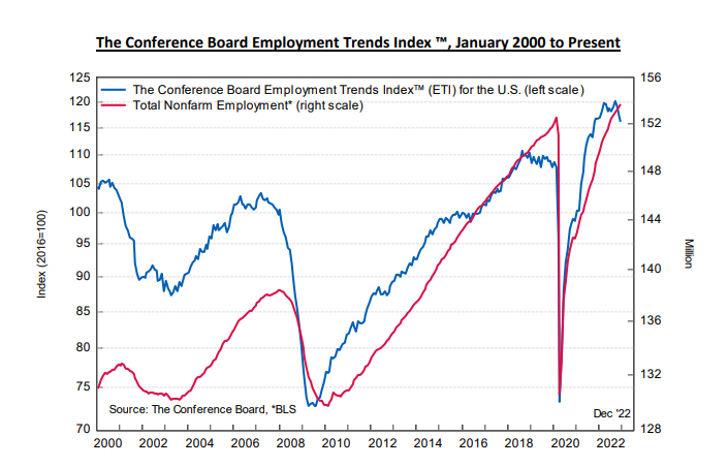 Total nonfarm payroll employment increased by 223,000 in December, slightly above the Dow Jones estimate of 200,000. According to current data, notable job gains occurred in leisure and hospitality, health care, construction and social assistance. In total, payroll employment increased by 4.5 million in 2022, which equates to an average monthly gain of 375,000 – down from a monthly average of 562,000 in 2021.

“Overall, the labor market remains tight. Job openings and voluntary quits continue to be elevated across most industries and layoffs remain low,” says Frank Steemers, senior economist at The Conference Board. “On the other hand, the number of employees working in temporary help services – a component of the ETI and an important leading indicator for hiring – has fallen for five consecutive months and may foreshadow weaker job gains or even job losses in other industries.” 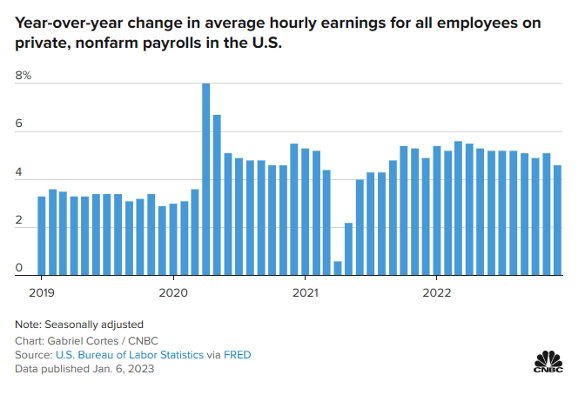 “From the market’s perspective, the main thing they’re responding to is the softer average hourly earnings number,” says Drew Matus, chief market strategist at MetLife Investment Management. “People are turning this into a one-trick pony, and that one trick is whether this is inflationary or not inflationary. The unemployment rate doesn’t matter much if average hourly earnings continue to soften.”

Looking ahead, Steemers expects the Federal Reserve’s rapid interest rate hikes to result in a more visible, negative impact on the economy and job growth throughout 2023. By year-end, The Conference Board forecasts the unemployment rate will hit 4.5% and labor force participation will decline to 61.8%.

The NFIB Small Business Optimism Index declined 2.1 points in December to 89.8, marking the 12th consecutive month below the 49-year average of 98. Owners expecting better business conditions over the next six months worsened by eight points from November to a net negative 51%. Inflation remains the single most important business problem, with 32% of owners reporting it as their top problem in operating their business. Overall, 55% of owners reported hiring or trying to hire in December. Nearly 93% of those hiring or trying to hire reported few or no qualified applicants for the positions they were trying to fill. Eight percent of owners cited labor costs as their top business problem and 23% said that labor quality was their top business problem.