Below is a synopsis of consumer confidence, sentiment and spending trends.

The Conference Board Consumer Confidence Index® climbed in December following back-to-back monthly declines. The Index now stands at 108.3 (1985=100), up notably from 101.4 in November. The Present Situation Index – based on consumers’ assessment of current business and labor market conditions – increased from 138.3 to 147.2. The Expectations Index – based on consumers’ short-term outlook for income, business and labor market conditions – improved from 76.7 to 82.4. Conversely, Expectations continue to linger around 80, a level associated with recession.

“Consumer confidence bounced back in December, reversing consecutive declines in October and November to reach its highest level since April 2022,” says Lynn Franco, senior director of economic indicators at The Conference Board. “The Present Situation and Expectations Indexes improved due to consumers’ more favorable view regarding the economy and jobs. Inflation expectations retreated in December to their lowest level since September 2021, with recent declines in gas prices a major impetus.”

According to recent data, vacation intentions improved but plans to purchase homes and big-ticket appliances cooled further. Franco says the shift in consumers’ preference from big-ticket items to services will continue in 2023, as will headwinds from inflation and interest rate hikes. 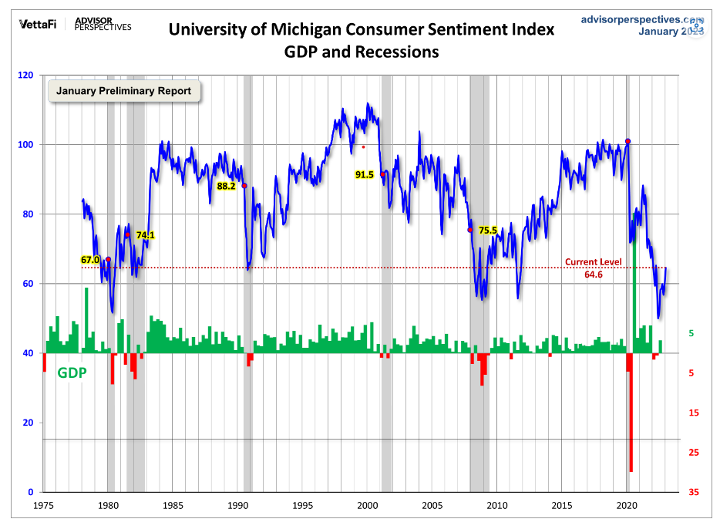 The chart evaluates the historical context for this index as a coincident indicator of the economy. Toward this end, Advisor Perspectives highlighted recessions and included GDP. To put the current report into larger historical context since its beginning in 1978, consumer sentiment is 24% below its average reading (arithmetic mean) and 23% below its geometric mean. The current index level is at the 8th percentile of the 541 monthly data points in this series. The indicator is somewhat volatile, with a 3.1-point absolute average monthly change. The latest data point showed a 4.9-point increase from the previous month.

The Consumer Sentiment Index January Preliminary Report is currently 64.6, up 4.9 (8.2%) from the December final, according to the University of Michigan Survey of Consumers.

“Uncertainty over both inflation expectations measures remains high, and changes in global factors in the months ahead may generate a reversal in recent improvements,” says Joanne Hsu, director at Survey of Consumers. 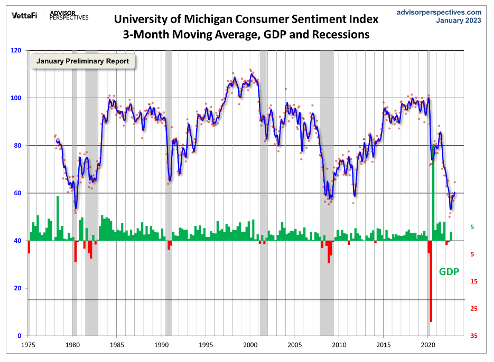 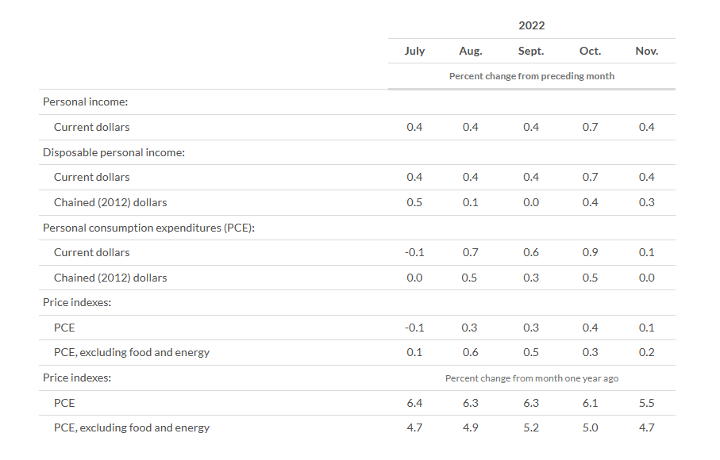