November marked the highest consumer price hike in nearly four decades, according to reports. American wallets absorbed financial increases across the board, from gas and groceries to vehicles – confirming inflation as a cornerstone of the current economy.

The Consumer Price Index for All Urban Consumers (CPI-U) increased 0.8% in November on a seasonally adjusted basis after rising 0.9% in October, according to the U.S. Bureau of Labor Statistics. Over the last 12 months, the all items index increased 6.8% before seasonal adjustment – the largest 12-month increase since the period ending June 1982.

The indexes for gasoline, shelter, food, used cars and trucks, as well as new vehicles were among the larger contributors to the monthly all items seasonally adjusted increase. The energy index jumped 3.5%, as the gasoline index increased 6.1% alongside other major energy component indexes.

The index for all items less food and energy rose 0.5% in November following a 0.6% increase in October. The indexes for household furnishings and operations, apparel and airline fares also increased. Meanwhile, the indexes for motor vehicle insurance, recreation and communication all declined in November.

Over the last 12 months, the index for all items less food and energy rose 4.9% while the energy index rose 33.3% year-over-year, and the food index increased 6.1%. These changes are the largest 12-month increases in at least 13 years in the respective series, according to the Bureau of Labor Statistics.

Total nonfarm payroll employment increased by 210,000 in November, and the unemployment rate fell 0.4 percentage point to 4.2%; however, the report is far below economists’ predictions of 573,000 job gains.

Additionally, an ongoing decline in labor force participation, particularly among prime-age workers, poses an issue for productivity and growth, according to S&P Global Ratings. For example, last month’s 4.6% unemployment rate is actually the equivalent of 6.4% when adjusted for the labor force exit. 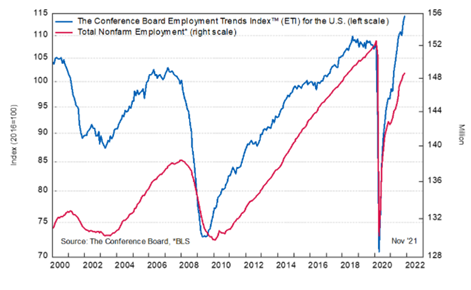 The Conference Board Employment Trends Index™ (ETI) increased slightly in November. The index now stands at 114.49, up from 113.03 in October (an upward revision). 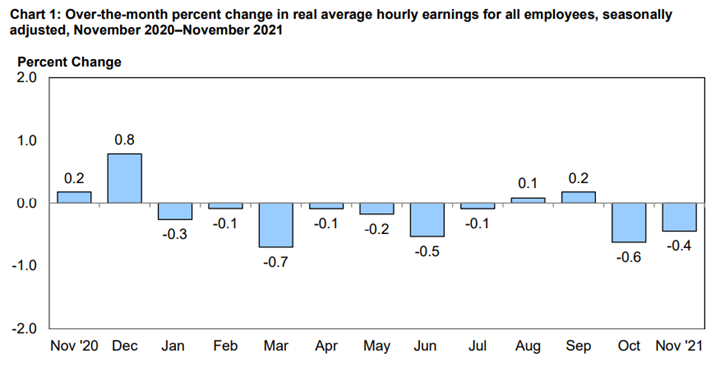 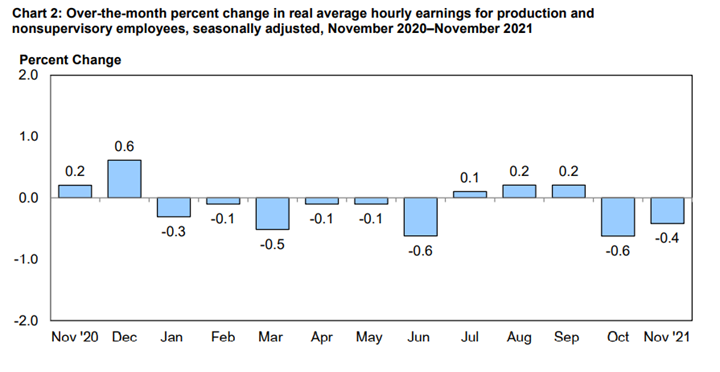 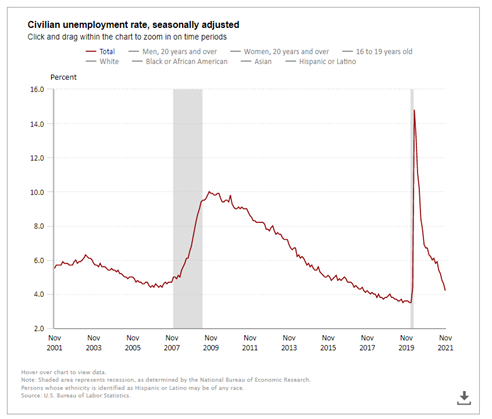 Nonfarm employment increased by 18.5 million since April 2020 but remains down 3.9 million, or 2.6%, compared to its pre-pandemic level in February 2020. This month, notable job gains occurred in professional and business services, transportation and warehousing, construction and manufacturing.

“On its current trajectory, much of the job growth ahead should come from sectors still in the process of reopening, including restaurants, hotels, entertainment, personal services and passenger transportation. These industries are relatively labor intensive, so their further recoveries will be key for sustaining strong job growth,” stated Gad Levanon, head of The Conference Board Labor Markets Institute.

“At the same time, labor supply will struggle to meet the demand for workers, as the U.S. working-age population stagnates and Baby Boomers drop out of the workforce. We currently project the unemployment rate – already down to 4.2% – to approach 3% by the end of 2022, which would mark a 70-year low,” he continued.

“Indeed, even if pandemic disruptions to labor supply fully subside in the year ahead, a tight labor market is likely here for the foreseeable future. Employers should expect recruiting difficulties and quit rates to remain high, fueling the upward pressure on wages,” Levanon said.