“Expectations about short-term growth prospects ticked up, but job and income prospects ticked down. Concerns about rising prices – and, to a lesser degree, the delta variant – were the primary drivers of the slight decline in confidence,” Lynn Franco, senior director of economic indicators at The Conference Board.

“Meanwhile, the proportion of consumers planning to purchase homes, automobiles and major appliances over the next six months decreased. The Conference Board expects this to be a good holiday season for retailers and confidence levels suggest the economic expansion will continue into early 2022. However, both confidence and spending will likely face headwinds from rising prices and a potential resurgence of COVID-19 in the coming months,” Franco added.

Similarly, The Consumer Sentiment Index – a survey consisting of approximately 50 core questions covering consumers’ assessments of their personal financial situation, buying attitudes and overall economic conditions –declined sharply in November. At 67.4, “Consumers expressed less optimism in the November 2021 survey than any other time in the past decade about prospects for their own finances as well as for the overall economy,” according to the University of Michigan Survey of Consumers.

The decline is attributed to rapidly escalating inflation combined with the absence of federal policies that would effectively redress the inflationary damage to household budgets. While pandemic-induced supply-line shortages were the precipitating cause, Chief Economist Richard Curtin noted the roots of inflation have grown and spread more broadly across the economy.

“Even when Biden’s social infrastructure program is finally approved, it will not immediately ease inflation nor wage growth,” Curtin stated. “The real transient issue is the rapidly closing window when effective policy actions can be accomplished by very modest nudges in interest rates and regulations.”

At present, Curtin said consumers still expect inflation to revert to a much lower level over the next five years, but that anchor has begun to yield ground: long-term inflation expectations rose by 0.5 percentage points in the past year, to 3% in November.

“If expected long-term inflation continues to accelerate in the first half of 2022, it will make its containment more difficult and, even more so, if the rise continues into the last half of 2022. Moreover, a protracted inflationary period will bring a renewed urgency for expanding government relief payments from job losses to cover inflationary declines in living standards. There will be no more compelling precedent for consumers than the 5.9% inflationary adjustment in Social Security payments that will start in January 2022,” Curtin explained. 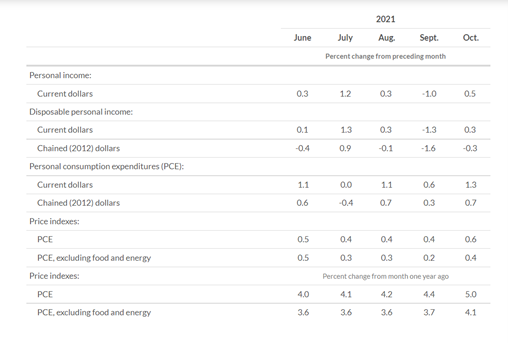