The U.S. economy continues to claw its way out of the single largest quarterly contraction in 75 years, with a second quarter 2020 GDP rate of -32.9% (annualized rate compared to the first quarter of 2020), according to The Conference Board.

As White House economic advisor Larry Kudlow recently addressed on CNN’s “State of the Union,” various economic indicators point to a greater-than-expected growth rate and V-shaped recovery. “However, a new surge of COVID-19 cases in various parts of the country is threatening to dampen the recovery path,” added The Conference Board, which has outlined two likely economic recovery scenarios of its own:

• Base Case Forecast: “Our base case forecast includes a third quarter GDP rebound of 26% and a fourth quarter GDP contraction of 1.6%, both annualized rates. Given the severity of the economic contraction in the second quarter, even a moderate improvement in economic activity over the summer yields strong growth rate in the third quarter. In our baseline forecast consumer spending is the largest driver of growth over the summer, but then stalls as high levels of unemployment damage spending later in the year. This yields an annual growth rate of -4.9% in 2020 and puts the U.S. economy on a path for about 2% growth in 2021. We do not expect a full recovery until early 2022.”

• Upside Forecast: “Alternatively, we offer a second more optimistic scenario in which the growth trend seen in May and June is sustained in July, August and September. Even if this is the case, we would still expect high unemployment rates, in the double digits, to damage consumer demand in the fourth quarter. This upside forecast results in an annual growth rate of -3.3% in 2020 and a rebound of 4.4% in 2021. In this scenario U.S. monthly economic output with completely recover by August 2021.”

Nonfarm payroll employment increased in 40 states and the District of Columbia, decreased in one state and was essentially unchanged in nine states during July, according to the U.S. Bureau of Labor Statistics. 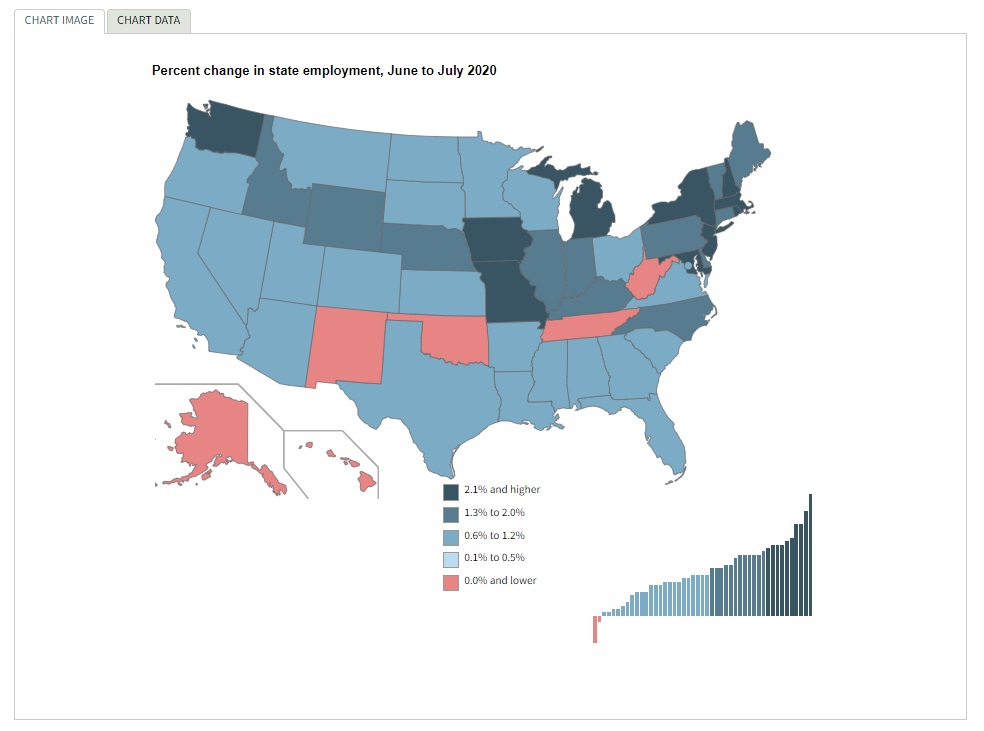 In addition to job gains, real average hourly earnings (adjusted for inflation) increased 3.7% from July 2019 to July 2020, after increasing 4.1% over the year ending June 2020. “The recent large increases in hourly earnings reflect the substantial job loss among lower-paid workers as a result of the COVID-19 closures. The July increase in real earnings resulted from a 4.8% increase in average hourly earnings being partially offset by an increase of 1% in the Consumer Price Index for All Urban Consumers,” stated the U.S. Bureau of Labor Statistics. 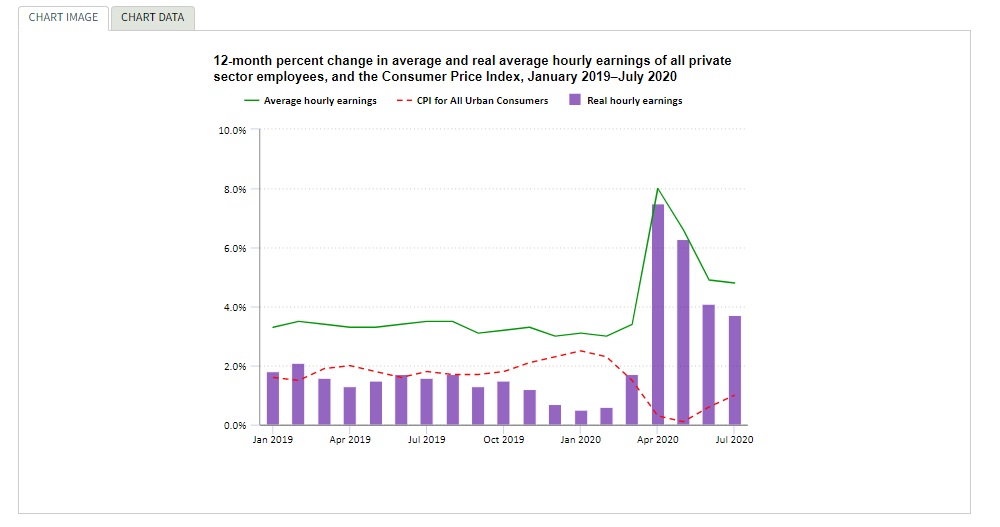 According to the U.S. Bureau of Labor Statistics, those at work part time for economic reasons, or involuntary part-time workers, totaled 8.4 million during July. This was a decrease of 619,000 people from the previous month, but 4.1 million higher than in February 2020. These individuals, who would have preferred full-time employment, were working part time because their hours had been reduced or they were unable to find full-time jobs. This group includes people who usually work full time and people who usually work part time.

Total nonfarm payroll employment rose by 1.8 million in July. For comparison: less than the increases of 4.8 million in June and 2.7 million in May but lower than the February level by 12.9 million. The largest employment increases occurred in leisure and hospitality, government, retail trade, professional and business services, other services and health care. In particular, employment in leisure and hospitality was a bright spot (+592,000), accounting for approximately one-third of the gain in total nonfarm employment. 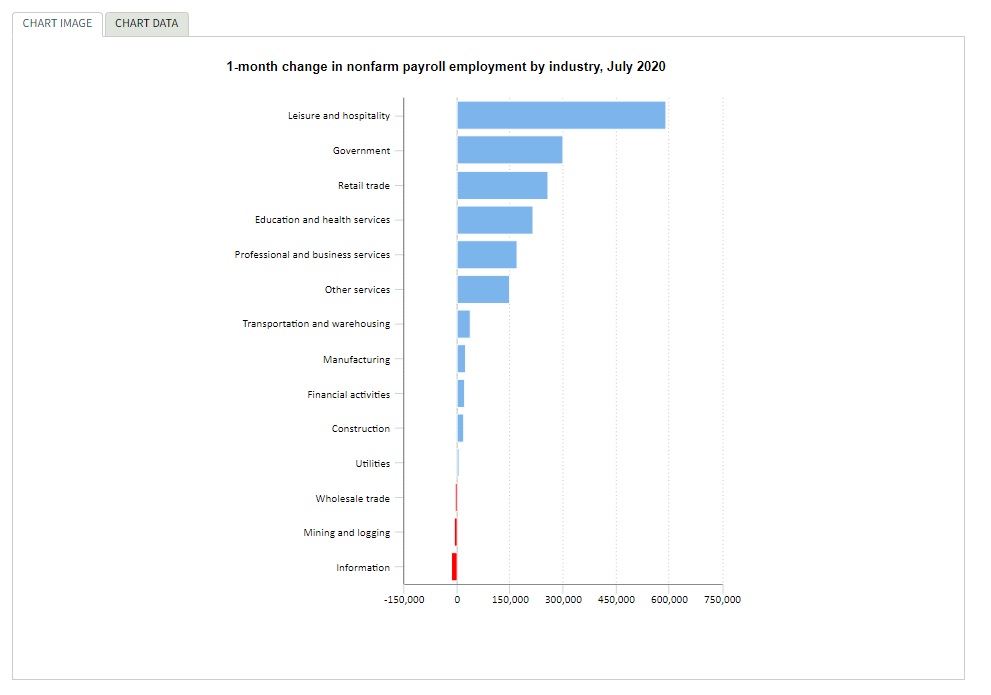 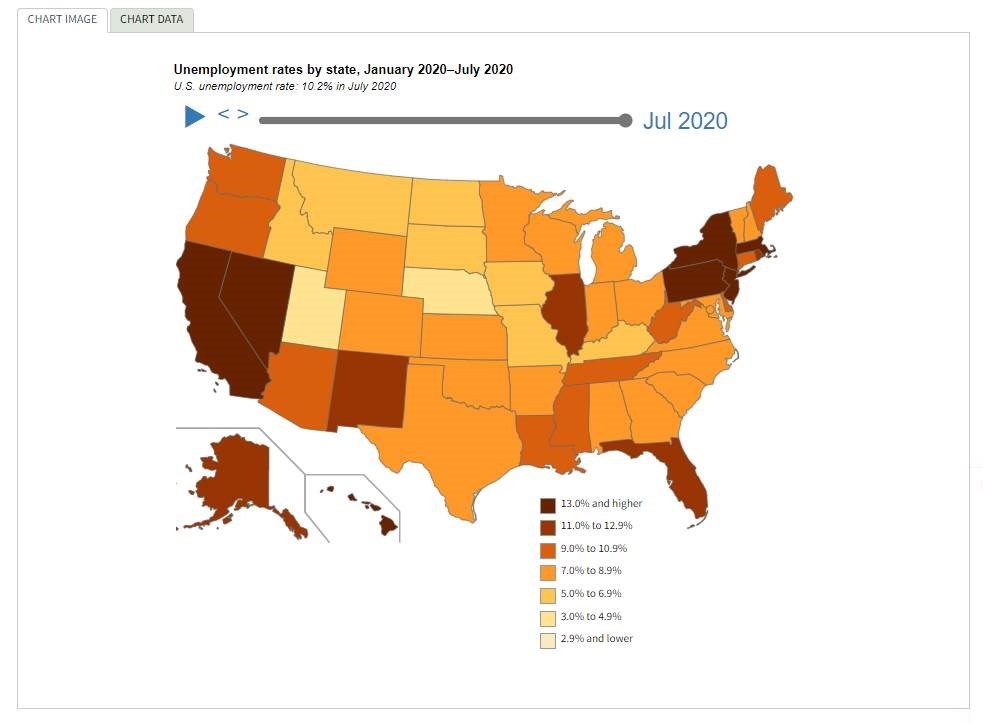 Massachusetts recorded the highest unemployment rate in July—16.1%, followed by New York—15.9%. Rates in Connecticut (10.2%), New Mexico (12.7%) and New York (15.9%) set new series highs. Conversely, Utah reported the lowest unemployment rate—4.5%, followed by Nebraska—4.8% and Idaho—5%. In total, 28 states and the District of Columbia had jobless rates lower than the U.S. figure of 10.2%, 11 states had higher rates and 11 states had rates that were not appreciably different from that of the nation.