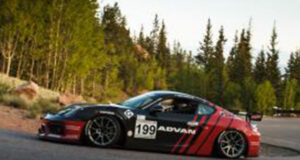 From sports cars to trophy trucks, Yokohama Tire’s racing heritage will be highlighted – along with several new ultra-high performance (UHP) and off-road/light truck tires, vehicles and action sports star Travis Pastrana – at its SEMA Show booth (#62118-62119) this year. The SEMA Show runs from Nov. 5-8 at the Las Vegas Convention Center.

Located just outside South Hall, Yokohama’s new activation truck and trailer will anchor the race-themed booth, which will have distinct UHP and light truck sections, highlighting both their motorsports roots and new product lineup. Several unique cars will be on hand in a multi-level display.

“Racing, both on- and off-road, has been a hallmark for Yokohama – it’s in our DNA,” said Andrew Briggs, Yokohama’s VP of marketing and product management. “We’re looking forward to vividly presenting our storied racing legacy, rich heritage and all-new product lineup to the worldwide trade audience and car enthusiasts who attend.

Highlights of Yokohama’s SEMA booth include: