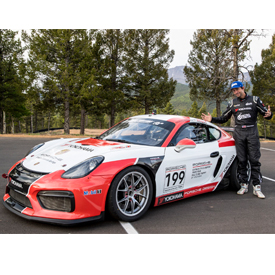 The tiremaker has partnered with Porsche Motorsport North America and is the sponsor and exclusive tire supplier for the Porsche Cayman GT4 Clubsport Pikes Peak Hill Climb Trophy by Yokohama. The new and invitation-only class will be featured on June 24 at the famous Broadmoor Pikes Peak International Hill Climb near Colorado Springs, Colorado.

All eight entries will compete on Yokohama off-the-shelf ADVAN A052 tires, including Pastrana. Pastrana competed in the Rally Car class at the Pikes Peak International Hill Climb twice (2004 and 2005). He finished first in 2004 in Rally Group X in his rookie year on Pikes Peak driving a Subaru WRX with a time of 13:10.30.

“I’m really looking forward to getting another crack at the mountain in a Porsche Cayman GT4 Clubsport running on Yokohama tires,” Pastrana said. “How cool is that? The Broadmoor Pikes Peak International Hill Climb is one of the most iconic races in the world. The new Porsche Cayman GT4 Clubsport Pikes Peak Hill Climb Trophy by Yokohama class is an awesome way to get re-familiarized with the mountain in a fun, but super-competitive class.”

Pastrana will also be at Yokohama’s booth at Fan Fest on June 22, taking photos and signing autographs.