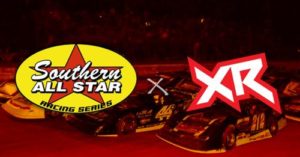 The Southern All Star Dirt Racing Series is the oldest Super Late Model series in the United States, according to the organization. It was created in 1983 and has held full seasons of competition every year since. This season will be its 40th in existence.

“This acquisition is huge for XR and the Southern All Star Dirt Racing Series,” said XR Chief Operating Officer Dan Robinson. “We can’t wait to have the longest-running Super Late Model Series under our umbrella. This will certainly elevate both of our brands.”

In assuming ownership of the Huntsville, Alabama-based Southern All Star Dirt Racing Series, XR will work with current series personnel to conduct, produce and promote all races on the current 2022 schedule, the company said.

“After talking with XR, I know I’ve found the right people to take over the series,” said Southern All Star Dirt Racing Series owner Matt Wagner. “I bought the series 10 years ago because I didn’t want to see it shut down. We kept things simple and that’s what I know XR will do. With the resources, people and time XR has, the series is in great hands.”

The series will become a part of the XR family, joining a growing number of XR-owned and produced events/series across the country. Those include the inaugural XR Super Series for Super Late Models, the Karl Kustoms Bristol Dirt Nationals at Bristol Motor Speedway (Tenn.) and the Duel in the Desert at The Dirt Track at Las Vegas Motor Speedway (Nev.) among others. XR announced on Jan. 10 it would also be purchasing the Texas-based Southern Touring Late Model Series.

The Southern All Star Dirt Racing Series currently has 23 races in nine different states on its 2022 schedule, beginning on Feb. 5 with a $10,000-to-win event at Screven Motor Speedway in Sylvania, Georgia. The season will conclude Sept. 17-18 at the Alabama State Championships at East Alabama Motor Speedway in Phenix City, Alabama.

“We are beyond excited to be joining the XR family with the purchase of our series,” said Southern All Star Dirt Racing Series Director & Lead Announcer Dewayne Keith. “Matt Wagner and I talked about the future of the series and how much XR will be a major boost for the series. The purchase will ensure a long and prosperous future for the series to carry on founder B.J. Parker’s legacy and the history of the oldest continuous-running Super Late Model series in the nation.”