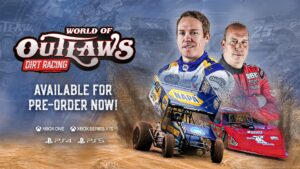 World of Outlaws: Dirt Racing is the latest dirt racing-themed title from developer Monster Games, but its first since being acquired by iRacing in late 2021, the company said. The new title adds new car and track models, sounds, and multiplayer technology from iRacing. All-new physics, also tuned by iRacing, and a retooled, more competitive AI add to the challenge, with real-world driver feedback held at a premium throughout the development process, the developer said.

“We’re thrilled to bring World of Outlaws back to console gaming with World of Outlaws: Dirt Racing,” said Monster Games founder and general manager Rich Garcia. “With the addition of iRacing resources to the established Monster platform, as well as the support of World of Outlaws, this is the most realistic, challenging, and most importantly, fun dirt racing experience ever seen on the PlayStation or Xbox. We can’t wait for dirt racing fans to go wheel-to-wheel at Eldora, Knoxville, and more this fall.”