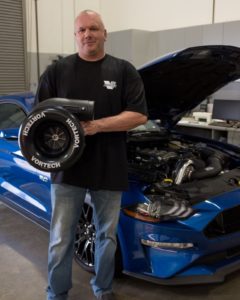 Werremeyer is more commonly known in the racing community as Dave W, according to Vortech. He has been an integral part of the drag racing and performance community for many years. Well known and highly respected among racers and manufacturers alike, Werremeyer brings a wealth of racing information and relationships that will benefit both new and existing Team Vortech racers.

Werremeyer previously served as national tech director and racer communications for ProMedia, in charge of creating and overseeing the rules for the heads up racing classes, and running each vehicle through tech inspection at each NMRA and NMCA race event. He has been involved in racing in one way or another his entire life, helping his father at the track when he was young. He ended up building a 1968 HEMI ‘Cuda to race the Super Stock class, finally turning it into a career working with manufacturers and race organizations.

“Help us welcome Dave W. to the Vortech family this upcoming racing season when you see him at the track or in the pits by saying hello, and feel free to ask him how your race program can benefit from Vortech Supercharged power,” Vortech stated in a news release.

Contact Werremeyer by emailing dwerremeyer@vortechsuperchargers.com or calling him at 805-247-0226 ext. 220.