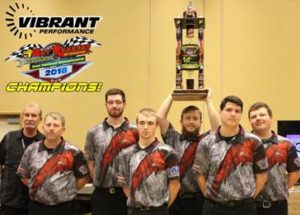 High school students at the Dec. 6-8 PRI Show buzzed around several Chevy 350 high performance engines, tearing them apart and re-assembling them in mere minutes. This of course was for the Hot Rodders of Tomorrow Engine Challenge 2018 Dual Championship, which pitted eight high school auto clubs against one another with scholarship money on the line.

It was the third HROT championship for a team coached by Burton Center’s Chris Overfelt.

“I am in shock all over again,” he said. “I was not nervous because the team has kept their composure all week”.

It was a close competition as all of the Elite Eight teams flew around the Chevy 350 high performance engines. All eight teams had at least one perfect engine build. Teams Engine & Performance Warehouse, Vibrant, and Edelbrock each had two perfect engine builds during the Elite Eight playoffs. The total time difference between first and fourth place teams was just 2 minutes and 8 seconds.

The final half of the two-part Hot Rodders of Tomorrow Engine Challenge 2018 Dual Championship took place at the PRI Show in Indianapolis. It included 17 teams coming from all across the U.S. with the hopes of becoming one of four teams to move on and compete in the Elite Eight playoffs against four other teams awarded an Elite Eight berth during the first part of the championship, held at the SEMA Show.

A total of 44 teams competed at the SEMA and PRI shows to get into the Elite Eight competition. The top four SEMA show seeds against the top four PRI show seeds.

“This is a Roller-coaster of emotions,” said Tyler Perkins from Team Edelbrock after the Elite Eight playoffs. “Each run felt like a runaway freight train that could derail at any moment.”

There was a new coach participating in this year’s Dual National Championship. Drew Graham from Forsyth Central High School, who led Team Moroso, has been a part of all components of the HROT program, as a student, judge, and now as coach.

The times in HROT competition are based on three important factors: The average time from three rounds of taking apart and reassembling the engine; penalty minutes added for mistakes made during disassembly and reassembly; and a 50-question written test on parts and tools identification along with general engine and rules knowledge.

Each student in the HROT Dual Championship earned scholarship opportunities ranging from $5,000 to $10,000 from Ohio Technical College, School of Automotive Machinists & Technology, and Universal Technical Institute.

For more information about the HROT program, contact Greg Parker at 574-315-1938 or by emailing [email protected].