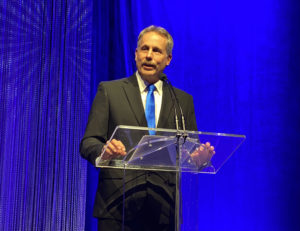 Vintage Air President Rick Love was one of four automotive aftermarket industry members inducted into the Specialty Equipment Market Association (SEMA) Hall of Fame for 2021, the organization announced. Love was recognized as an innovative leader who has influenced and inspired the automotive specialty-equipment industry and followed the induction of Vintage Air Founder Jack Chisenhall in 2020, the company said.

Love has been with Vintage Air for over two decades and is known for his many accomplishments, including being a part of the team that helped engineer Vintage Air’s transition to electronically controlled air conditioning systems as well as the climate control systems for both modern generations of the Ford GT, the company said. He received the 2013 Hot Rod Industry Alliance Industry Recognition award and the NSRA Industry Appreciation award in 2018. Love has also served multiple terms as the chairman of SEMA’s HRIA council.

“I was beyond shocked and humbled to get the call telling me I was one of the newest Hall of Fame inductees; never would I have even given something like that a thought,” said Love. “I feel so fortunate to be in this industry as long as I have been. It’s allowed me to meet so many people that have turned into lifelong friends and I’m forever grateful for it.”

Shortly after moving to Texas in 1982, Love met Vintage Air Founder Jack Chisenhall when he visited the facility to inquire about components to install air conditioning in his 1940 Pontiac sedan. After gaining experience with Vintage Air systems, Love utilized his electrical engineering degree to wire hot rods and install air conditioning systems on the side from his home garage while also working as a freelancer for Rodder’s Digest magazine. Love continued to engulf himself in the hot rod lifestyle, driving his 1939 Ford Coupe to every automotive event he could, often helping Vintage Air at the shows. It was this drive and passion for the industry that caught Chisenhall’s attention, which led to him offering Love a full-time position in 1998, the company said.

In 2008, Love had the opportunity to drive George Poteet’s 1932 Ford Roadster at the Bonneville Salt Flats, licensing up to a speed of 185 mph. He also recently completed a rebuild on the 1939 Ford Coupe he has owned for 35 years after having driven it almost 200,000 miles.