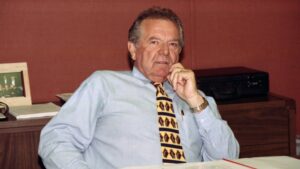 Beginning with the 2022 season, USAC’s Chief Mechanic of the Year Award will be named in honor of championship-winning mechanic and USAC president, Johnny Capels, the sanctioning body announced.

The award, which will be presented annually, will recognize the individual deemed most worthy based on the criteria of their mechanical performance, team success and how the individual deals with race officials and the media, the organization said. The special perpetual trophy is being commissioned to be made by an artist and will be on permanent display at the USAC Headquarters building in Speedway, Indiana as a permanent tribute to Capels.

The recipient must be a USAC nationally-licensed member and must have worked in one of the three USAC national series during the year to be eligible for the Golden Greek Award, and will receive a one-of-a-kind, specialized trophy for their achievement, plus a $10,000 award.

Capels passed away on June 9 at the age 86. He served in numerous roles within the auto racing community, including as a builder, driver, chief mechanic, team manager, car owner and series president, USAC officials said.

“He was a man that meant so much to the United States Auto Club,” said USAC President and COO Kevin Miller.  “The Golden Greek Award is a way to preserve his legacy while honoring the present and future chief mechanics who have and will follow in his path.”

After winning his only USAC National Sprint Car feature as a driver at New York’s Erie County Fairgrounds, Capels made his mark as a premier racing mechanic, and was instrumental on the Vel’s Parnelli Jones team crew during back-to-back Indianapolis 500-mile victories with driver Al Unser and his famed Johnny Lightning Special in 1970-71.

Shortly thereafter, Capels was integral in back-to-back USAC National championships, turning the wrenches for driver Joe Leonard in 1971-72.  He also earned USAC Championship Dirt Car titles as a mechanic on the famed Viceroy cars for Al Unser in 1973 and Mario Andretti in 1974, and as a car owner and constructor for Pancho Carter in 1978.

In 1975, Capels began a new role when he partnered with car owner Alex Morales as the team’s chief mechanic and team manager. In that position, he scored marquee victories in CART’s inaugural Michigan 500 in 1981 with driver Pancho Carter and once again in the 1986 event with Johnny Rutherford as the driver.

In 1992, Capels became USAC Senior VP and Director of Competition before becoming USAC President and COO from 1997 to 2001, then served as the Chairman of the Board of Directors for USAC from 2002 to 2010.