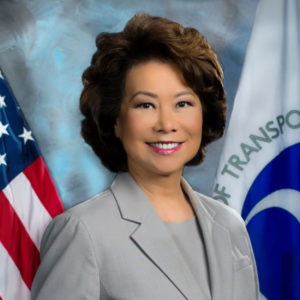 The Consumer Technology Association (CTA) is welcoming U.S. Secretary of Transportation Elaine L. Chao to CES 2019 to deliver a keynote. Chao’s speech is titled The New Mobility Revolution. She will speak at 11a.m. on Jan. 9, and plans to focus on the future of drones and self-driving technology and how they will revolutionize transportation.

Owned and produced by CTA, CES 2019 will run Jan. 8-11 in Las Vegas. Chao also spoke at CES 2018, where she discussed how technology and disruptive innovation have the potential to make transportation safer while connecting Americans and American business to greater opportunity.

“As America’s highest-ranking transportation official, Secretary Chao is leading the Administration’s efforts to realize the promise of transportation technology and innovation-including self-driving vehicles, piloted and unmanned drones-while ensuring public safety,” said Gary Shapiro, president and CEO of CTA. “The future of transportation will be on display at CES. And Secretary Chao’s discussion of the DOT’s latest initiatives will provide a roadmap for industry, domestic and international government officials at CES and across the globe.”

Following Chao’s address, a panel of experts will discuss the importance of establishing public trust to ensure consumers understand the benefits of self-driving vehicles and that deployment of the technology is safe.

Chao served as U.S. Department of Labor Secretary from 2001-2009. She is the first Asian-American woman to be appointed to the President’s Cabinet in American history. She previously served as Deputy Secretary of Transportation, president and CEO of United Way of America, and director of the Peace Corps.

CES 2019 will showcase the latest advancements in self-driving technologies, according to CTA. In fact, vehicle tech at the 2019 show will be larger than many stand-alone car shows. More than 150 vehicle tech exhibitors, including nine automakers, will feature the latest concept cars and connected car technology.