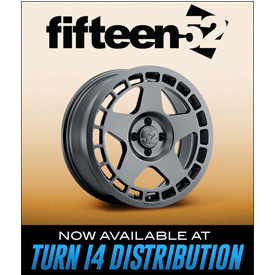 Turn 14 Distribution has announced the addition of fifteen52‘s cast monoblock wheels to its line card.

“fifteen52 has an impressive fan base and social media following. This is due in part to their several strategic partnerships with influencers, media, and licensing partners. fifteen52 will be an excellent addition to our line card with their popularity among consumers and ability to compliment other brands,” said Kyle Shelley, Turn 14 Distribution’s director of sales.

Most known for their unique wheel designs, fifteen52’s doors opened in 1996 as a division of Joe Hoppen Motorsport. Hoppen was the former director for Porsche Motorsport North America, and was responsible for entering Porsche into the fabled SCCA Can-Am series. fifteen52 is comprised of enthusiasts first and foremost, and they hope the passion for all things automotive translates into everything they do, according to the company.

fifteen52 defines itself by its concept rather than any specific line of products or services, according to the company. fifteen52’s No. 1 goal is to offer their customers whatever wheels and styling enhancements they desire in order to make them feel they own truly unique automobiles.

“At fifteen52, their industry relationships are every bit as important as those they have with customers,” according to Turn 14 Distribution. “No one gets to the top on their own, and fifteen52 believes that choosing the right industry partners is critical to any single company’s chances for success.”