Power Automedia’s SpeedVideo has released its official schedule for the 2019 drag racing season, and the year promises to be the most exciting one yet, according to the company.

With access to championship series including PDRA, NMCA, and NMRA as well as standalone-style shootout races such as the World Cup Finals, No Mercy and Lights Out, World Series of Pro Mod, FL2K, and more, SpeedVideo is set to provide robust HD coverage of more than 30 of the most influential drag races of the year, according to the company.

Renewing its commitment for live coverage of the PDRA, NMCA, and NMRA seasons for 2019, SpeedVideo will be on-site at each race to provide top-quality online access to all the action as it unfolds. Additionally, SpeedVideo will also return to stream live feeds of the World Cup Finals, Snowbird Outlaw Nationals, Outlaw Armageddon, and the US Street Nationals.

Coverage of FL2K will be new for 2019, and a multi-year agreement has been put into place for continued live broadcasting of the No Mercy, Lights Out, and World Series of Pro Mod events.

“In 2018, we had our largest broadcasts to date in terms of views and minutes watched. Now, 2019 is all about giving viewers more exciting racing than ever and making this our most watched year yet. We’ve added races never before seen on SpeedVideo to the schedule and continued our partnerships with the most respected series and independent promoters in the country,” said Tom Bobolts, SpeedVideo general manager.

SpeedVideo’s dedication to delivering drag racing direct to fans is only made possible through partnerships with the baddest events on the planet.

“No Mercy 9 was our first time working with SpeedVideo, and the crew delivered a professional live stream feed which we hadn’t had before,” said Donald Long of Duck X Productions. “We’ll be working directly with SpeedVideo to cover all three of our events at South Georgia Motorsports Park for 2019 and beyond-Lights Out X, the Sweet Sixteen 2, and No Mercy X-and we can’t wait to get the party started.”

“It seems only fitting that the ‘Biggest, Richest Pro Mod Drag Race in the History of the Known Universe’ be available to the masses by way of the industry’s leading live streaming service-SpeedVideo,” added Wes Buck, founder of the $100,000-to-win Pro Mod shootout in Colorado. 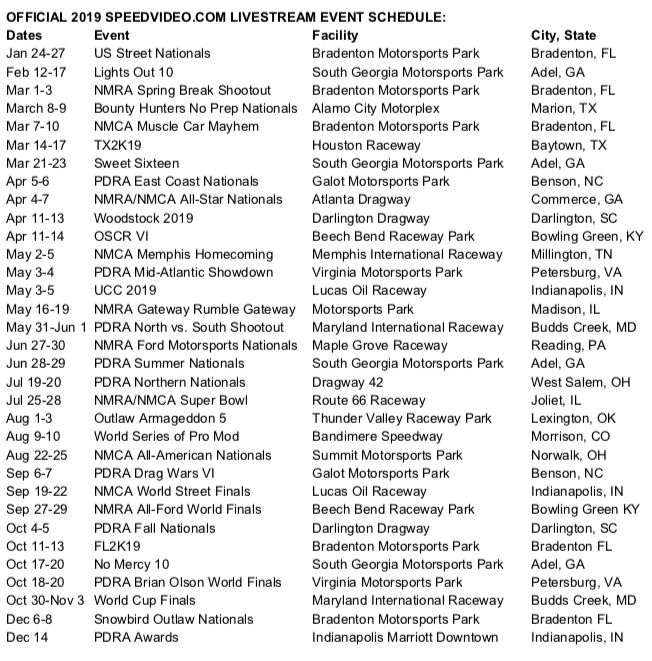