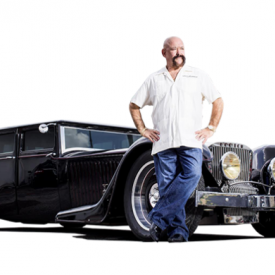 Ted Vernon of Ted Vernon Specialty Automobiles Inc. has been cast for a role in a film titled The Bomb Heard Around The World. The fllm will be based a book by the same title written by Gregory Markett.

This movie, based in the civil rights era, “depicts the true story of civil rights couple, Harry T. and Harriette Moore, who was killed in Mims, Florida, in 1951, around the same time as Dr. Martin Luther King’s Civil Rights Movement,” according to producers. Harry T. and Harriette Moore were murdered when a bomb set by the Ku Klux Klan blew up their home on Christmas Day, which was also their anniversary.

Vernon will take on the role of Sheriff Willis McCall, the Lake County sheriff notorious for brutality against African Americans, according to producers.

Ted Vernon Specialty Automobiles Inc. has been in the South Florida classic car business for more than 40 years. Vernon has expertise in wide selection of automobiles from any era-he has classic cars for sale and provides these classic automobiles for several occasions such as professional modeling shoots, and movie and TV rentals, according to the shop.