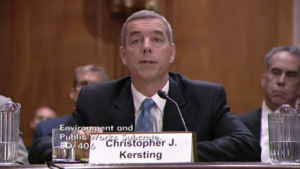 Chris Kersting, SEMA president and CEO, testified in support of the RPM Act on Tuesday in front of a Senate subcommittee. Kersting delivered prepared remarks before taking questions from the senators.

“The RPM Act clarifies that it has always been legal to make the emissions-system modifications needed to convert a previously street-legal motor vehicle into a race car used exclusively at the track under the Clean Air Act,” Kersting said. “The bill also confirms that it is legal to manufacture, distribute, sell, and install race parts used to convert these vehicles for exclusive use on the track.”

Kersting was invited to testify on the RPM Act-joining panel testimony covering several bills-by the Senate Subcommittee on Clean Air and Nuclear Safety. He said the RPM Act was tailored to protect motorsports from regulations after the Environmental Protection Agency (EPA) in July 2015 issued a proposed regulation declaring the Clean Air Act prohibits converting a street vehicle into a race car.

“Under the EPA interpretation, manufacturing, selling and installing racing parts to accomplish such a conversion would also be a violation of the Clean Air Act,” Kersting testified. “Although the EPA did not finalize the proposed rule, it maintains that the Clean Air Act prohibits race car conversions, along with the sale and use of racing products that can be installed on these vehicles. SEMA contends the EPA interpretation contradicts 47 years of previous EPA policy and practice.”

John Walke, clean air director for the Natural Resources Defense Council, testified in opposition of the RPM Act during the hearing. He said the bill loosens current regulations to allow unfettered sales of aftermarket defeat devices for vehicles other than race cars.

“Unfortunately, the current language of the RPM Act opens a hugely damaging loophole in the Clean Air Act. I believe the resulting increase in air pollution will dwarf the harmful air pollution and health impacts of the recent VW(Volkswagen) cheating scandal,” Walke said. “The current bill language could make it almost impossible for EPA and the Department of Justice to stop the sale of heretofore illegal defeat devices, as long as a company claims that they intend the device to be used for racing.”

“What VW did was an intentional program to hide a defeat device in the system for vehicles that are being sold new where no one would see or know that that defeat device is there,” he said. “In the case of the racing industry and converting a vehicle, those products are marketed and known-¦the EPA has access to see those products, and that’s why enforcement action does take place under the act in the case of street tampering.”

Kersting also cited several examples of how the RPM Act would protect the small-business industry that supports motorsports.

“At the local level, the Sonoma County Economic Development Board estimates that Sonoma Raceway in California generated nearly $2 million in regional economic impact for a single vintage race weekend,” he said. “The (Sonoma) Raceway demonstrates the nexus between racing and the economy. About 75 small businesses are in the adjoining industrial park where many of these vehicles are converted, modified, stored, prepared for events and fixed when they break.”

The Senate version of the RPM Act was introduced Jan. 24 by Sen. Richard Burr (R-North Carolina). The bill is sponsored by 29 Republicans and 9 Democrats from 27 different states.

The House version of RPM Act on Wednesday is set to undergo a markup session during a hearing by the Subcommittee on Environment, chaired by Rep. John Shimkus (R-Illinois). A markup session typically features debate and the possibility of amendments being placed onto the bill.

The House bill currently has 140 sponsors (124 Republicans and 16 Democrats) from 36 different states. The bill, introduced by Rep. Patrick McHenry (R-North Carolina), would amend the Clean Air Act to allow the modification of a vehicle’s air emission controls if the vehicle is used solely for competition.