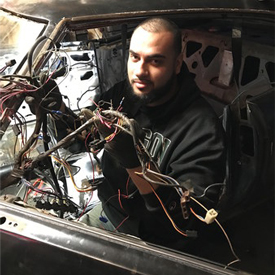 Mason Ludwig, a 15-year-old rising star in Late Model class racing, and Jon Corral, a radio producer and hot rod restoration enthusiast, are the grand prize winners in the 2018 Search for a Champion contest from Champion auto parts.

“Mason and Jon are perfect examples of what this contest is all about: Celebrating and rewarding the passion that drives the North American car culture and do-it-yourself community,” said Dana Bubonovich, manager of social media and digital promotions for Federal-Mogul Motorparts. “Enthusiasts really responded to their stories and hopes of becoming members of #TeamChampion.”

“This was my third year in the contest and I just kept trying to improve my marketing and social media posts to attract as many votes as possible,” said Ludwig, who began his racing career in a go-kart at the age of seven.

Ludwig said he will use the grand prize sponsorship to travel to additional tracks in 2018 and increase the team’s support of local charities.

“Winning the grand prize means the world to me because it will help advance my career and allow us to help others,” he said. “It’s awesome to be able to work with the people at Federal-Mogul Motorparts and Champion.”

Corral-”who uses the name Class1c and produces a show called Friendly Fire Radio streamed through the Dash Radio digital platform-will apply the Champion prize to the restoration and enhancement of a 1972 Chevrolet Black Diamond Chevelle that will be displayed at this year’s SEMA Show in Las Vegas. The car is being built in Corral’s garage.

“This is an unbelievable opportunity-my first SEMA build and maybe a path to someday owning a hot rod restoration business,” Corral said. “One of the coolest things about this contest has been the feedback I’ve received from other do-it-yourselfers. There have been so many people who have told me, ‘You represent me – I have a daily job but try to find the time to do what you’re doing.'”

Champion established the contest in 2012 to connect with a new generation of grassroots racers and other enthusiasts. Champion, over the first seven years of the contest, has awarded nearly $900,000 to grassroots racers, do-it-yourselfers and maintenance enthusiasts who have best demonstrated their passion for engine-driven performance.

More than 700 participants competed for sponsorships, advancing through the contest’s two rounds, based on votes received at SearchForAChampion.com. A record of nearly 190,000 votes were counted.

The 10 runners-up in the on the track category are: