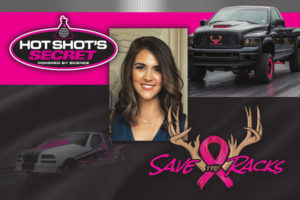 Amalee Mueller is having an inspiring season in Pro Stock and Limited Pro Stock sled pulling classes, where she has taken the points lead in both. She’s also holding second place in points for the Super Diesel class of NHRDA’s Hot Shot’s Secret Diesel Drag Racing series.

After Mueller’s mother’s triumphant battle against breast cancer, Mueller decided to launch a campaign to raise awareness for breast cancer. She rebranded her Dodge Cummins powered truck with her Save The Racks brand.

Lubrication Specialties Inc. (LSI) now supports Mueller’s cause by donating funds for each pass she makes in the Super Diesel race truck, as well as the family’s other Save The Racks branded Pro Stock race truck, currently driven by Larson Miller from Firepunk Diesel. All funds will be donated to the Breast Cancer Research Foundation.

Halfway through the season, over $4,000 has already been raised.

With every pass made during the season by Amalee or made by the Save The Racks Pro Stock truck, Hot Shot’s Secret donates $50. Additionally, the company provides a $250 bonus for finishing runner-up and a $500 bonus for a class victory.