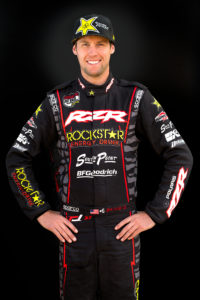 Rockford Fosgate has entered into a sponsorship agreement with six-time off-road racing champion RJ Anderson. Anderson drives the No. 37 Polaris Rzr/Rockstar Energy Pro2 & Pro4 as well as the XP1K.

“At only 25 years old, RJ is a multiple big-time off-road award winner, and we couldn’t be more excited to have him on the Rockford Fosgate team,” said Tammy Lowe, Rockford Corp.’s director of marketing. “Motorsport and off-road audio solutions have been a large part of our product offering for many years, and sponsoring RJ will get our brand out in front of his legions of followers.”

Anderson was born and raised in the off-road world, and he has developed a name for himself with partners such as Polaris Rzr, Rockstar Energy, Walker Evans Racing, and BFGoodrich. Coming up through Trophy Karts and UTVs, he worked his way through the ranks and now owns the racing team RJ37 Off-Road. Anderson has six off-road racing championships and more than 100 career podiums. In addition, he is the star of the XP1K viral video series grossing more than 30 million views.

“While motorsports as a whole is massive, off-road is a pretty niche market,” said Anderson. “Rockford Fosgate is the dominant audio brand in off-road and those are the companies I like to be associated with. My good friend Joey D. (of UTVUnderground) is also partnered with Rockford, and I can’t wait to show up with something louder than him for once.”

“Even though I spend the majority of my time focused on my next big race or project, there’s nothing I look forward to more than some down time,” Anderson said. “I can’t wait to equip a couple Rzrs with the Rockford Fosgate Stage 5 kits and be the life of the party everywhere I go. I also spend a lot of time on the road, so you better believe I’ve read the Rockford Fosgate catalogue front to back- we’re equipping everything.”

Rockford Fosgate provides a full line of multi-stage kits for off-road vehicles, including Polaris, Yamaha, and Can-Am. According to the company, all kits are designed to provide high performance audio for the back country and twisted trails while out in the elements.