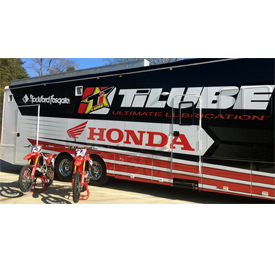 Rockford Fosgate has been named the official sponsor of the Rockford Fosgate/TiLUBE Honda Team for the 2018 season. The team will compete in the full schedules for AX and ATVMX and will be competing in the SX East Lites rounds.

“This announcement is very exciting for Rockford Fosgate,” said Tammy Lowe, Rockford director of marketing. “Our industry-leading mobile audio systems are purpose-built for the off-road and ideal for use in the elements. In recent years, the motorsports enthusiast has become a prime customer of ours, and so being the title sponsor of this team gives us the chance to strengthen our connection with the motorsports fan base. We are excited to get in front of this team’s fanatic followers throughout the year.”

Since its inception in 2003, TiLUBE has become one of the most trusted names in motocross and powersports in the midwest, according to the company.

“Having Rockford Fosgate on board as our title sponsor is huge,” David Eller, said team owner. “They are loud, proud, and purpose-build their audio gear to survive in any environment. Whether we’re in the stadium or out on the track, Rockford Fosgate is the perfect partner for a rock’n 2018 season.”