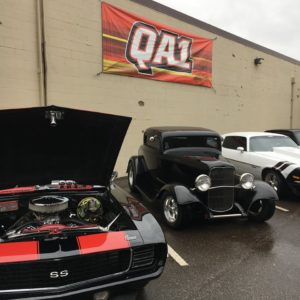 QA1 opened its Lakeville, Minnesota facility to the public for the seventh year in a row last month for an open house and cruise-in event.

Designed as an intimate gathering for enthusiasts before they cruised up to the Minnesota State Fairgrounds in St. Paul for the Street Machine Nationals, this year’s event drew approximately 200 people through the QA1 facilities in celebration of the company’s 25th year of business, according to a press release.

During the tours participants gained an inside look at QA1’s daily operations, from carbon fiber winding for driveshafts to welding of tubular components to CNC-machining and shock assembly.

To commemorate the company’s 25 years, the open house also included the opportunity to win a variety of QA1 prizes, from aluminum signs and pint glasses to $2,500 in QA1 gift certificates. Other game prizes included items from Summit Racing Equipment, Intercomp, Mothers, JEGS and local restaurants.

This year’s Ride of the Year winner was Marshall Holt of Lakeville, who brought his 1930 Willys Whippet Coupe that was built from an old circle-track chassis and features a custom-made body.

“With the large variety of vehicles that come to our open house, it’s tough to pick just one Ride of the Year, but when Marshall pulled in, everyone took notice,” says QA1’s Steve Smith. “It’s a really cool mix of parts that make up the car, and it really exemplifies the #goDRIVEit spirit.”

When the tours were over and the prizes and awards handed out, approximately 100 cars continued the party and cruised to the Minnesota State Fairgrounds, where participants gained VIP preferred entrance to the Street Machine Nationals.

QA1 sponsors the autocross competition at the event, where a range of muscle cars and trucks collectively ran nearly 1,000 passes over the weekend.