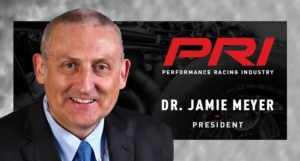 Dr. Jamie Meyer has taken the role of President of the Performance Racing Industry (PRI) Trade Show and media company, effective this week, the organization announced. Meyer will lead the PRI team in increasing engagement and support for the industry through enhanced programs and services for the motorsports community.

“In addition to providing the industry with world-class trade events and publications, PRI is committed to enhancing resources, advocacy and representation for the motorsports industry,” said Chris Kersting, president and CEO of SEMA. “Dr. Jamie Meyer will be instrumental in leading the team. He has great knowledge and understanding of racing businesses, teams and drivers, and he will be a valued leader to help motorsports and the industry grow.”

Meyer leaves a very successful 15-year career at General Motors, where he served as the Advanced Performance Parts Program Manager, the Performance Marketing Manager, as well as several marketing and advertising roles for Chevrolet, Cadillac, GMC and Buick.

“I have always enjoyed sportsman motorsports,” said Meyer. “I was influenced early on by local circle track racers and that lead to a fascination of fast street cars and drag racing. I am looking forward to bringing that passion and energy to the PRI community and working with an already established team of industry leaders.”

Meyer led the revival of the COPO Camaro, E-ROD crate engine, LSX race block and engine family, and initiated such events as the Chevrolet Performance US Nationals, LSX Shootout and sponsorship of the NMCA series of drag races. Meyer was also instrumental in onboarding the Force Family to Chevrolet as well as multiple marketing activities with NASCAR drivers.

Most recently, Meyer developed the performance parts and racing parts strategy for all General Motors vehicles including their full-size truck lineup, C8 Corvette, current Camaro models and the coming portfolio of battery electric vehicles. Meyer’s marketing efforts include the development of multiple websites, national advertising campaigns, trade show strategy development and the formation of the social media suite of offerings from Chevrolet Performance.

Based in Indianapolis, Meyer will lead efforts to establish a new office and permanent presence in the area as he serves and engages the racing community, develops programs and services for the motorsports industry and continues to lead the PRI Trade Show, one of the top 40 trade events in the United States.