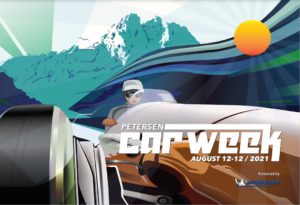 Below is the final schedule of events, premiering live daily for three hours starting at 11 a.m. PST on the Petersen YouTube channel:

“Monterey Car Week is special because of the camaraderie and passion of the enthusiasts who attend,” said Petersen Executive Director Terry L. Karges. “For individuals who are unable to attend the events in Monterey, or for the car fanatics who would like to learn more in addition to attending the events, Petersen Car Week will be a fun and interesting way to learn more about cars and celebrate the spirit of the world-class Monterey Car Week.”

Petersen Car Week will be hosted on the Petersen Automotive Museum YouTube channel. To be considered for the Concours, users must submit their vehicles by July 30, 2021.