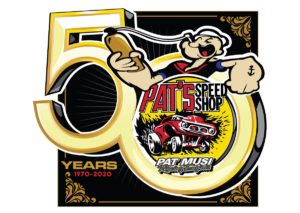 Pat Musi, engine builder and owner of Pat Musi Racing Engines, is celebrating his 50th year in business in 2020.

“It’s exciting to see everything you’ve worked for come together,” Musi said. “We’ve proven ourselves over the years, and we’ve won a lot of championships and had a lot of success. It’s been pretty cool.”

The anniversary will be recognized during a special open house later this year at his facility in Mooresville, North Carolina, an event that will also officially launch the Edelbrock Race Center, an endeavor with one of Musi’s longtime partners. The open house is scheduled for Saturday, Nov. 14, and will feature a number of special guests. More details will be released as the event approaches.

Musi was self-taught, he says, and as the speed shop got progressively bigger, he also got a chance to compete against his idols.

“Where it is today, I would have never imagined it,” Musi said. “I started driving when I was 20-21 years old, and the guys I read about – Bill Jenkins, Ronnie Sox, Bob Glidden, Lee Shepherd – I immediately got involved match racing them. It was a cool deal to be able to race those guys and outrun them sometimes. I had the work ethic to do well and I was willing to put in the time.”

Over the course of his 50 years in business, Musi has built partnerships with the likes of Edelbrock and Lucas Oil. Over the last two years, Musi and Edelbrock have partnered on products including cylinder heads, manifolds and an expansion upon a long-standing crate engine partnership.