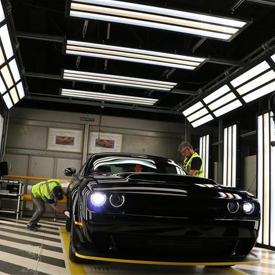 The last 2018 Dodge Challenger SRT Demon rolled off the line last week at the FCA US Brampton Assembly Plant in Ontario, Canada. The limited-production Demon and the last 2017 Dodge Viper hand-built American supercar will be auctioned as a pair at the June 20-23 Barrett-Jackson Northeast Auction with all hammer proceeds from the sale going to the United Way.

Production of the Challenger SRT Demon was limited to one model year and 3,300 units.

The winning bidder at the Barrett-Jackson Northeast Auction, held at the Mohegan Sun Resort in Uncasville, Connecticut, takes home a combined 1,485 horsepower with the 840-horsepower Demon and 645-horsepower Viper.