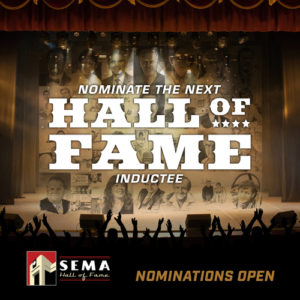 SEMA is now accepting nominations for the SEMA Hall of Fame, the organization announced.

Established in 1969, the SEMA Hall of Fame recognizes people who have contributed a significant body of work to the industry over a long period of time. It is designed to honor the leaders, innovators, creators and enthusiasts, SEMA says, who have helped transform small, burgeoning businesses into an industry worth more than $44.6 billion annually.

Nominations are open until March 19.