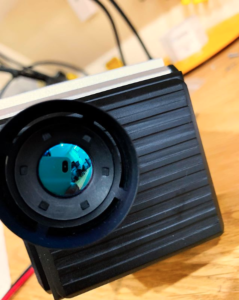 NightRide, a new thermal imaging camera designed to make night driving safer for everyone, was featured in the History Channel special Battle of the 80s Supercars with David Hasselhoff. The show originally aired on Wednesday, July 10. The program highlighted how popular TV in the 1980s influenced car engineering and innovations that followed, and that includes car accessory technology like NightRide.

“With the launch of our product less than two months ago, the NightRide feature in the show is great timing,” says Shawn Groce, founder of NightRide. “KITT’s futuristic dashboard inspired our heads-up display that gives drivers  the power to see four times further than their headlights.”

Battle of the 80s Supercars is one of several special programs planned for History Channel’s third annual Car Week. The program may end with a one-of-a-kind race with the Knight Rider KITT car, the A-Team Squad Van, and the motorcycle featured in ChiPs, but the bulk of the two-hour special will focus on a variety of unique vehicles and tech they feature. This includes an amphibious sports car, the fastest car in the world, and a car with a consumer-ready night vision dash cam-”NightRide.