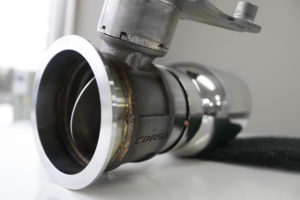 “CORSA has rewritten the playbook for performance exhausts with their revolutionary technology known as Reflective Sound Cancellation (RSC). This technology gives CORSA the ability to target and eliminate resonant frequencies that cause drone, while simultaneously tuning the exhaust note. With numerous patents spanning multiple generations of this technology, CORSA Performance sets the standard in performance exhaust systems,” says Motovicity. “Behind every CORSA exhaust system is an endless array of advanced engineering processes and manufacturing technologies that enable them to continuously exceed industry standards. Some of these include proprietary acoustic software, computer-aided design, CNC tooling, six-axis precision laser cutting, world-class hand and robotic welding, and high-definition laser etching.”