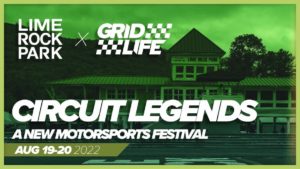 GridLife recently revealed its 2022 schedule and announced plans for a new festival in the Northeast called “Circuit Legends” to be hosted at Lime Rock Park, scheduled for Aug. 19-20.

The Circuit Legends motorsports festival will celebrate the automotive culture of the mid-1980s through the mid-2000s by featuring vehicles that represent “The Golden Age of touring car racing,” event organizers said.

“The Circuit Legends concept will be GridLife’s Concours Event. It’s a car culture and motorsports showcase designed for the younger generation that was brought up on Speedvision, BTCC, DTM, JTCC, etc,” said Chris Stewart, GridLife founder and experience director. “We will celebrate automotive heroes as our headliners to bring a legendary group of 80s-90s-00s racing vehicles together for this inaugural event.”

The Circuit Legends Festival is a collaboration between GridLife and Lime Rock Park, which will co-produce the event, track officials said.

“We’ve been working to deliver the best experience possible for our guests and debuting Circuit Legends at Lime Rock Park is a truly exciting addition to our 2022 schedule,” said Dicky Riegel, Lime Rock president and CEO. “’Circuit Legends’ reflects our ambition to introduce Lime Rock Park to a new audience in partnership with GridLife. The track has several events, and we are eager for our fans to experience this new addition to our schedule in August.”

On track, GridLife will bring its HPDE, TrackBattle Time Attack, GridLife Touring Cup (GLTC), and a special “Legends session” where the legacy touring cars will be on track at speed in a shootout style showcase.

More details will be released in the coming months as production of Circuit Legends at Lime Rock Park begins, the organization said.