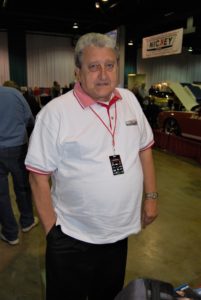 Milt Schornack—a legendary Pontiac mechanic—passed away last November. Schornack was born in Detroit on July 8, 1935, and was 85-years-old at the time of his death. He was most famous for his work on the Bobcat GTOs that were modified for drag racing by Ace Wilson’s Royal Pontiac dealership in Royal Oak, Michigan. He also teamed up with Keith J. MacDonald, a former president of the Bay State Tigers GTO Assoc., to compile the 2006 book “Milt Schornack and the Royal Bobcat GTOs.”

Schornack began working on cars as a teenager and bought his first Pontiac, a 1941 model, when he was 16. Schornack met John DeLorean’s brother George at his Wynn Engineering shop and went to work for him at his larger Leader Automotive shop in 1962. Schornack stayed with DeLorean and went racing with him, but he set a goal to get a job at Royal Pontiac, a high-performance factory dealership in Royal Oak.

In October 1963, Dick Jesse of Royal Pontiac hired Schornack. At about the same time, the GTO came out and the Royal Bobcat GTO was born. Adman Jim Wangers, who created the GTO, was Royal’s race driver. That changed one Sunday afternoon in 1964 when Dick Jesse gave Schornack the job after he drove well in time trials.

Milt Schornack’s expertise was appreciated at Royal Pontiac and made him well known, not only to the racing fraternity but also to Pontiac engineers and managers. When Royal Pontiac closed in late 1969, Milt headed back to work for George DeLorean at Leader Automotive, but DeLorean was more interested in building race cars for professionals than he was in helping the weekend warriors. Schornack then decided to start his own business and called it Royal Automotive. He stopped drag racing after 1972 and closed his shop the following year.

Schornack worked at other car dealerships, before being hired by Pontiac Engineering, where he worked on special projects such as the 1989 Turbo Trans Am. In 2007. Schornack joined with Mike Henderson to launch the Motor City Muscle shop in Troy, Michigan. There he built high-performance Pontiac engines for restorers and racers.

Schornack was inducted into the Pontiac Hall of Fame in 2019. Milt is survived by Sharon, his wife of 57 years, three children and seven grandchildren.