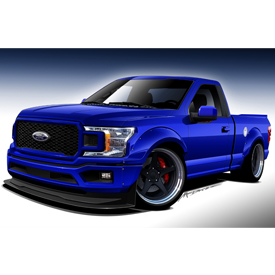 Busch uses Forgeline FF3 wheels on his personal F-150, which he will be driving in a drifting demo in the Ford Out Front exhibit in front of the Las Vegas Convention Center.

Kurt Busch Inc., a high-performance development shop out of Mooresville, North Carolina, selected Forgeline wheels for the 1,000 horsepower drifting F-150 truck. Bryce Spence, the shop foreman, chose Forgeline because the build required an American-made wheel with a proven history of performance, which could withstand the forces a wheel is subjected to in these demanding conditions, according to the company.

The Ford F-150 drift truck was designed and styled by Zac Brown Customs, a shop in Peachtree, Georgia, owned by Zac Brown of the Zac Brown Band. The truck also will be on display in the Ford booth at the Ford Eco Boost 400 race taking place at Homestead-Miami Speedway on Nov. 18 for the Monster Energy NASCAR Cup Series championship race.

Busch’s personal Ford F-150 drift truck will also be displayed at the Performance Racing Industry (PRI) Trade Show in Indianapolis on the Ford stage Dec. 6-8. The truck will be auctioned in January at Barrett Jackson Scottsdale, with proceeds benefiting Camp Southern Ground located in Georgia.