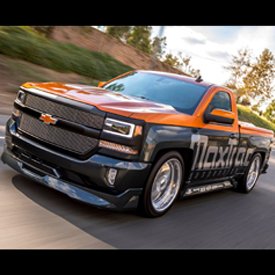 KICKER freestyler and X Games gold-medalist Colten Moore will be at the company’s Xtreme RV (XRV) signing autographs from 2-3 p.m. on Sept. 14-15. Moore wrote the 2016 autobiography Chasing the Sky, which was nominated for an ESPN Award in the field of literary sports writing.

KICKER’s 83-foot XRV rolling showroom displays the complete line of KICKER audio gear and houses the 20,000-watt Boom Room with a wall full of 15-inch L7 subwoofers. The XRV will be in booth OS-1016, by the east entrance of the show.

In addition to four custom UTVs, the MaxTrac Suspension Chevy 1500 LT will also be in the KICKER XRV area. The Silverado features KICKER KX-Series amplifiers, speakers and a thin-mount CompRT subwoofer in a custom enclosure.