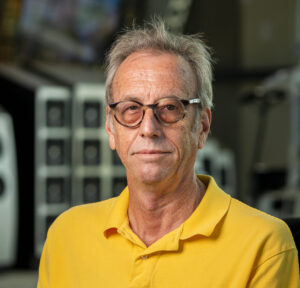 “He was an amazing visionary for the big picture,” said KICKER President and co-founder Steve Irby.  “We will certainly miss his contributions, his viewpoints and his insightful plans.”

While under Limbaugh’s watch, KICKER expanded the Marine and Powersports lines of products, formed the Home and Portables division and relocated 200 employees into the company’s new world headquarters in Stillwater, Oklahoma. He was instrumental in keeping KICKER relevant into the 21st century, playing an essential part of moving KICKER products into big-box retail and developing KICKER’s current UMAP (Unilateral Minimum Advertised Pricing) policy so dealers could grow their revenue.

He also got the KICKER brand involved in his auto passion, One Lap of America, for several years, and he co-drove a BMW during the 2018 road-course race.

Limbaugh started his audio career in 1975 at Pacific Stereo in Fresno, California. His passion for audio led him to be vice president at Linear Power for six years. After that, he led Polk Audio’s car-audio division for more than a decade before joining KICKER’s sales team.

“Rob was always extremely sharp,” said KICKER Director of Global Supply Chain Greg Lew. “He loved going to soundoffs. He loved loud audio. He was witty, trustworthy and a great friend–somebody you could chat with and challenge.”

Behind his famously dry wit and wry smile, Limbaugh was known to be a deep thinker and consistent voice among KICKER leadership.

“He had an amazing mind for seeing the overall plan,” recalled KICKER General Manager Jay Ralston. “He was an integral part of every major decision and had a gift for considering all the angles.”

“He was always presenting a bigger picture solution and played that role very well,” Irby said. “It’s important to have a diversity of opinions in a company to make balanced decisions, and we could always count on Rob. He will definitely be missed.”