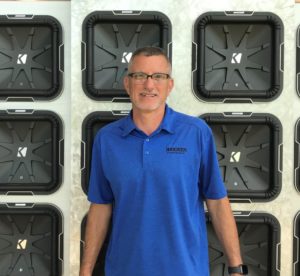 Stillwater Designs, manufacturer of KICKER audio products, has promoted David Glasgow to international sales manager. Glasgow is a KICKER veteran with more than two decades of experience in several positions within the company. He will take charge of several global accounts, to be determined at a later date.

“We’re incredibly excited,” Weddle continued. “We think David will be a fantastic addition to the team, and not just for the enthusiasm and work ethic he brings to the table.  He has the right mix of character and attitude we look for.

“Initially, his task will be to maintain existing relationships, and then going forward, forge a new presence in territories we haven’t explored before. We want to expand the ‘KICKER attitude’ in the field.”

KICKER, now in its 46th year, has steadily expanded distribution into more than 70 countries on six continents.

“Being a small team has allowed us to focus on the right partnerships and experience growth over the last several years,” Weddle said. “Now is the time to continue expanding and fully realize KICKER’s position on the global stage.”

“We’re going to grow the business by taking care of existing relationships and establish new ones,” Glasgow said. “By working closely with distributors around the world, we can increase communication, improve sales strategy and boost the retailer’s exposure to local markets.  Everyone wins.”