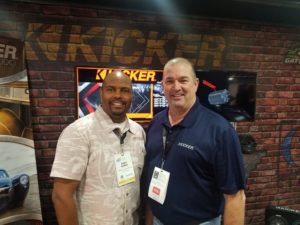 KICKER named Randy Bowen its 2018 national sales representative of the year, and Tech Marketing of Roswell, Georgia as its national rep firm of the year. The company made the announcements during the 2019 KICKER CES rep meetings in Las Vegas last week.

Both honorees exemplified outstanding performance, reflected in a dedication to outstanding customer service and exceeding sales expectations in 2018, according to Tom Heath, KICKER vice president of domestic sales and marketing.

Covering Southern California for Murfco Inc. and principal Dan Murphy, Bowen earned KICKER’s first ever National rep of the year award for his knowledge of local business and being a champion for his customers, according to KICKER.

“He knows how to walk the fine line between serving KICKER’s interests and working for the dealer,” said Tracy Focht, KICKER’s western region sales manager. “Randy understands KICKER’s programs, and knows what’s good for the company, the dealer and the market in his territory. If a promo won’t work for a certain dealer, he knows, and he knows why. He has his fingers on the pulse of his territory, and he is constantly in the field.  Murfco had an outstanding year, and Randy was a big part of that.”

Tech Marketing, in business for more than 30 years and led by father-son principals Ron and Richie Holtzman, along with sales reps Dennis Montgomery, Steve Paul, Mark Barber and Jim Branyon (who retired this month), earned the honor by providing excellent service and consistently finding ways to drive new business, according to KICKER.

“They are constantly looking for new ways to do business,” said Lori Boyer, KICKER’s southeastern region sales manager. “They’re hard-working and always out in the field, face-to-face with their customers. They look for ways to help our existing accounts with ideas to draw customers in, utilize social media, encourage them to take advantage of sales and product trainings we offer. They are committed to excellence and it shows.

“They don’t stop at the 12-volt industry,” she continued.  “They seek out businesses that you wouldn’t think would benefit from audio, and they show them how audio can benefit them. They do side-by-sides, golf carts, motorcycles, pools, spas and outdoors.”