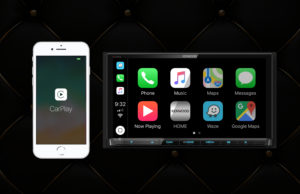 KENWOOD USA has introduced seven new-for-2019 multimedia receivers that enable iPhone users to wirelessly enjoy content through the receiver using Apple CarPlay. Prior to the introduction, a USB-to-Lightning cable was needed to connect the iPhone to the receiver and enable CarPlay features. iPhone users now have the choice to go wire-free or charge their phones with a direct connection.

With CarPlay, iPhone users can choose from a select menu of apps though the KENWOOD receiver, either by pressing familiar icons on the touch screen or by speaking requests to Siri, the iPhone’s virtual assistant. Supported apps include iPhone’s Apple Maps, Phone and Messages, as well as popular navigation, messaging, voice calling and audio apps from third-party developers.

“CarPlay and Android Auto really caused a revolution in the car audio industry when they were introduced,” said Scott Caswell, senior marketing manager for KENWOOD USA. “They gained traction by promising a predictable, interactive experience in any car equipped with a phone’s corresponding platform. This predictability has allowed us to quickly evolve the technology with wireless connectivity, allowing us to deliver more options to our end users.”