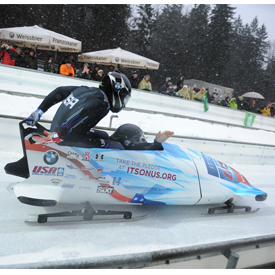 Intercomp is supporting the U.S. bobsled team on its quest to claim medals in the PyeongChang Winter Olympics in South Korea.

Five U.S. sleds are registered to compete in bobsled events, beginning Feb. 18. Four two-man sleds, and one four-man sled were set up using a set of Intercomp’s RFX Wireless racing scales. In addition, the team used a set of the company’s Digital Turn Plates, Digital Angle Gauge, Deluxe Pyrometer and a Digital Durometer to perfect the setup of each sled.

“We are looking forward to the start of the competition, next week, and are extremely proud of this partnership with USA Bobsled. Stay up to date with the latest from the action from South Korea by following Intercomp Racing on Facebook, Twitter, Instagram and LinkedIn,” Intercomp stated in a news release.

Across four timed runs, bobsled athletes will pilot either a two- or four-man sled down a narrow, ice-lined track. For each sled, the time taken to complete the course during each of the four runs are added together, with the winner of the competition determined by the lowest accumulated time. Fast runs will result in sleds reaching speeds over 90 mph, while athletes experience cornering forces up to five times the force of gravity.

A pilot, who uses a pulley system to steer the steel runners of the sled, and pusher/brakeman, who is responsible for giving the sled a greater majority of its speed at the top of the hill and stopping the sled at the bottom with the brake, make up a two-person sled. The four-man sled includes a pilot, brakeman and two dedicated pushers. Women compete in two-athlete sleds, while men compete in two- and four-athlete competitions.