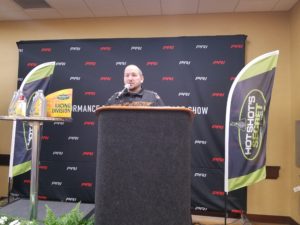 The new lineup will include three different viscosities of motor oils, including 15W-40, 20W-50 and ALKY-60W, as well as an SAE-80W gear oil. All of the oils are 100-percent PAO Synthetic racing formulas and are infused with Hot Shot’s Secret’s patented FR3 Friction Reducer for a horsepower-adding cocktail, according to the company.

“These premier racing formulas have been engineered as a result of continuous performance gains being made with the Hot Shot’s Secret FR3 Friction Reducer oil additive. The FR3 formula contains three patented nanotechnologies that work together to increase the efficiencies of a motor, reduce wear, reduce oil temperatures, restore lost compression and of course, increase horsepower,” the company stated in a news release. “The same technology that has brought FR3 to the attention of many racing teams is now being blended into Hot Shot’s Secret’s very own line of ADRENALINE High Performance Racing Oils.”