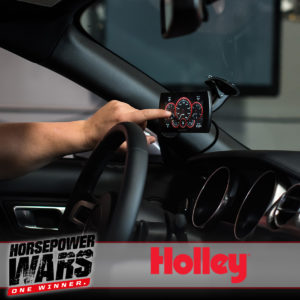 POWER AUTOMEDIA’s Horsepower Wars automotive show will continue a partnership with Holley for an even bigger, badder season two.

Holley has been a partner of Horsepower Wars since its inception, and with millions of viewers tuned in to watch the action as it unfolded in season one, the relationship has been extended to cover the second season of the show as well.

“Holley is happy to be a part of what is our second year of involvement with the Horsepower Wars Series,” said Blane Burnett, advertising & PR supervisor at Holley. “The LS vs. Coyote series, Junkyard Challenge along with Pony Wars and the $10K Drag Shootout have been great.”

The Holley family of brands has been involved with the Horsepower Wars challenges, including Diablosport and Nitrous Oxide Systems. In the inaugural Horsepower Wars $10K Drag Shootout, Holley was an essential component of Team Bigun’s massive success as a Holley Dominator EFI system was part of the winning platform. The head-to-head $10K Drag Shootout battle featured a no-holds barred, heads-up drag race going down after an epic 10-day thrash session as teams built their entries. Led by Eric Yost with driver Lyle Barnett, the team’s Holley Dominator EFI system helped to put their ’86 Ford Mustang GT into the winner’s circle.

Now, in season 2, the next Horsepower Wars $10K Drag Shootout is about to take center stage and teams will once again be relying on Holley parts to improve their chances of taking home the $10,000 paycheck. To watch Horsepower Wars Season 2, visit HorsepowerWars.com. For more information on the full line of products offered by Holley, visit Holley.com.