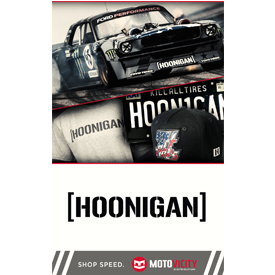 Motovicity Distribution has added the Hoonigan enthusiast-apparel brand to its extensive inventory.

“Per the definition, a Hoonigan is one who operates a motor vehicle in an aggressive and unorthodox manner, consisting of, but not limited to, drifting, burnouts, doughnuts as well as acts of automobile aeronautics. We found that to be fitting for what many of our customers like to do or would like to do,” said Jason Wieczorek, Motovicity’s purchasing manager. “Combine that with how well Hoonigan Racing Division has done on their respective circuits, wanting to sell their gear was a no-brainer.”

Hoonigan was spawned in 2011 by DC Shoes co-founder Ken Block and 0-60 Magazine Editor-in-Chief Brian Scotto. The motorsport-lifestyle brand has a penchant for automotive debauchery, according to the company.

For more information, call Motovicity at 888.SPEED.16 or visit Motovicity.com