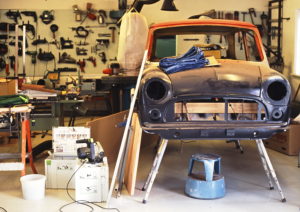 Hagerty has launched a new nonprofit, the Hagerty Drivers Foundation, which aims to celebrate car culture and preserve the act of driving, the company announced.

“The automobile is one of the most significant cultural achievements of modern society, but until now there has never been a coordinated effort to not only preserve that heritage but also expand and celebrate car culture itself,” said McKeel Hagerty, CEO of Hagerty. “That’s the gap we see the foundation filling.”

Through an initial pledge of $2.5 million, the foundation will focus its work in three areas:

Culture: The foundation will build upon the work of the Historic Vehicle Association, which was founded in 2009 through the philanthropic support of Hagerty and became the designated North American representative of FIVA (Fédération International des Véhicules Anciens), the international federation of historic vehicle organizations.

One of the HVA’s achievements was the formation of the National Historic Vehicle Register. Created in 2013 in collaboration with the U.S. Department of the Interior, the register creates within the Library of Congress a permanent archive of significant historic automobiles, motorcycles, trucks and commercial vehicles. To date, 28 vehicles have been added to the register.

At the Amelia Island Concours d’Elegance, the foundation displayed the 1981 DeLorean DMC-12 “Time Machine,” courtesy of The Petersen Automotive Museum. Featured in the 1985 hit movie, Back to the Future, the famed hero car will be the 29th vehicle added to the National Historic Vehicle Register. Another yet-to-be-announced vehicle will be added to the Register this year, and both will become part of the foundation’s annual Cars at the Capital display on the National Mall in Washington, D.C. this September.

Education: $400,000 of funding will be available to accredited educational institutions with programs that teach automotive restoration or preservation. These funds will be for a combination of scholarships as well as direct program support.

Through its innovative License to the Future initiative, the foundation will provide at least 200 scholarships this year to help young drivers afford driver’s education, which can cost $500 or more. The foundation believes that a lifetime of safe driving begins with a quality driver’s training course and this initiative will help the next generation of car enthusiasts learn the skills and rules of the road they need to protect themselves and others.

Innovation Awards: The foundation will build upon Hagerty’s Restore the Roar program, which provided a half-million dollars in grants to help keep small automotive companies afloat during the early days of the pandemic last year. Coming in August 2021, the foundation will announce categories that will award innovative ideas for businesses that are enhancing car culture for the entire community.