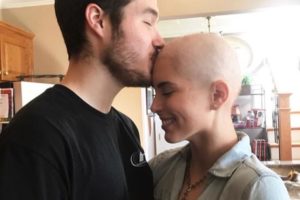 Before Megan Maryanski graduated from high school she already had a plan. She would report directly to Oklahoma for basic training with the goal of pursuing an intelligence career with the U.S. Army, a long-held dream.

Today, at age 19, Maryanski is fighting a very different kind of battle.

Earlier this year, Maryanski launched an intensive course of treatment that included six rounds of chemotherapy, followed by limb-salvaging surgery to replace her femur, knee and tibia in her right leg with internal metal prosthetics. But within days of the surgery, she was back in the emergency room with a dangerous infection. Doctors would eventually discover that the hardware within her leg was infected with drug-resistant bacteria.

Amputation, they told her, was the best option to save her life.

On July 13, her right leg was amputated just above the knee. Within days, Maryanski was upright and navigating the hospital hallways on a new prosthetic foot and leg with the aid of a walker, showing her old fighting spirit.

She shared a video with friends of her tentative journey, along with a feisty message:

With each step, Maryanski was also nearing another goal.

“I’m so excited for physical therapy today as I continue to learn to walk with my new leg. The closer I get to walking on my own, the closer I am to driving,” she told friends.

Cars have always been a heartfelt passion for Maryanski, especially American pony cars. Her summers were spent working at area racetracks, tinkering on cars and hanging at car shows, gobbling up all the automotive knowledge that she could along the way. In fact, she met her long-time boyfriend, Justin Meinert, at the Caffeine and Octane car show in Atlanta.

But even as Maryanski began learning how to navigate life with a new leg, Meinert knew that she faced yet another challenge. Getting her back into the driver’s seat with a new, prosthetic right leg would require retro-fitting a car with hand controls, an expensive investment.

His vision: Raise money to find a car that Maryanski could eventually help modify with hand controls. Not only would the goal be practical-allowing her to drive once again-it would give her something to look forward to, a reward for her hard work during a painful rehabilitation process.

Knowing that she was too old to benefit from traditional wish-granting programs designed for young people, Meinert took matters into his own hands, launching a GoFundMe campaign to help raise the money to help his girlfriend return to the freedom and mobility she had always enjoyed being behind the wheel of a car.

His goal is to raise $25,000. Days into the campaign, 189 people have already pledged more than $10,000. Now, he’s hoping to take Megan Maryanski’s Cancer Wish Fund to a broader audience.

“Megan can’t receive Make-A-Wish, but I’d like to grant her greatest wish,” he said. “She is always willing to help other people, and I want to help by giving back to her.”

To date, Maryanski is still in recovery at Children’s Healthcare of Atlanta’s Scottish Rite Hospital, where she reports that her amputation went perfectly.

For now, she is learning to wrap and care for her incision before being transferred to a rehabilitation unit where she will continue to build strength and skills working with her new leg, followed by extensive outpatient therapy. Due to the early resistance of her tumor to drug therapy, she also faces six to 12 months of additional oral chemotherapy.

But her mood is positive and she remains optimistic about a full recovery. “It may sound strange, but I’m truly loving being an amputee,” she said. “It will be a journey of overcoming, relearning, and learning how to live a normal life.

“Knowing that there is a possibility to raise enough money to buy a car that I would truly love to drive has given me a lot of motivation to get up and move and keep pushing forward,” she added. “Because there is a rainbow before me and I just have to get to the other side. And for me, the other side will include being independent and able to drive.”

Click for more information, or to donate money to Maryanski’s Cancer Wish Fund.