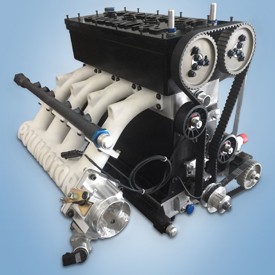 Permatex is set to display the Polimotor 2 during the Oct. 30-Nov. 1 AAPEX show.

“Permatex has applied its innovative leadership in chemical technology for automotive maintenance and repair to help Polimotor LLC and its founder, Matti Holtzberg, a leading authority on polymer engine technology, develop the next generation of polymer engines,” the company stated in a news release.

The Polimotor 2 engine was designed with fiber reinforced polymer engine parts that are used in place of some traditional metal components, in order to reduce weight. Weight reduction is a critical factor in both racecars and everyday vehicles in order to maximize fuel economy and horsepower.

The assembly of these new components requires innovative techniques to assure leak proof assemblies and fail proof performance, according to Permatex. To accomplish this, the Polimotor team is using Permatex Sealants and Gasket Makers in place of traditional pre-formed gaskets on all engine applications except the head gasket.

The engine will be on display in the Peratex AAPEX booth (No. 3418).

In 1972, Matti Holtzberg established Polimotor Research to develop fiber reinforced polymers that could be used to replace metal parts in internal combustion engines. Ahead of its time in 1980, he successfully created Polimotor 1, the world’s first polymer engine. Holtzberg designed and developed the Polimotor based on a Ford 2000cc engine with cast iron block. His polymer design weighed 168 pounds, about half the weight of the metal engine, and produced 280 bhp at 8500 rpm.

In 1985, Holtzberg shocked the global automotive industry and motorsports world by successfully competing in the IMSA Camel GT Championship as well as other notable racing venues with what was essentially the world’s first polymer racing engine.

In addition to Permatex, other key automotive manufacturers have also joined the Polimotor team including: Solvay, PolyOne, Toho Tenax, AGY, Mobil 1, and Mahle.