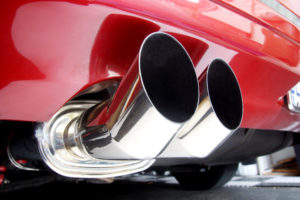 Over the years Edelbrock has identified many myths associated with emissions compliance. Here are the top five:

• Fines for small shops have been issued for as little as $475 and as large as hundreds of thousands.

Myth: Declaring that a part is “Race-Only” (e.g. advertisement, label) is enough to evade emissions compliance.

• EPA and CARB will ask the manufacturer or distributor for proof that there are enough race cars to use the parts that were sold.

Myth: “49 state legal” means that components can be sold in any state except California.

• Altering vehicle ride height, changing the drive axle ratio, or changing wheel size is not allowed unless the configuration has an EO, or is EPA Legal in states that don’t follow California’s emissions rules.

• CARB and EPA believe that by raising a vehicle, the frontal area of the vehicle increases and causes an increase to wind resistance, which may cause higher emissions.

Myth: Emissions compliance is not needed for vehicles older than 1976.

• Uncontrolled vehicles are defined as: